LG Electronics’ top man Koo Bon-joon’s air mileage must be piling up at record speed with all the overseas trips he has logged since taking over the distressed electronics maker last September.

Koo, 50, has been particularly travel-happy over the past few months, according to those close to the company, embarking on frequent trips to everywhere LG has production lines.

“He takes at least two trips a month, regularly,” said one source close to Koo.

He was recently in India, Saudi Arabia and Dubai, according to LG sources.

Before that, he was in Mexico and Brazil earlier this year, and will be making frequent visits to production lines in China where LG has about a dozen on-site firms.

Koo was tapped as a relief pitcher for LG Electronics last year when the company started to slip into a seemingly fathomless pit after failing to ride the “smart-wave.”

LG’s mobile business consequently relinquished 274.1 billion won ($2.2 million) in the fourth quarter of 2010 to fall into the red for a third straight month.
Before his appointment as vice chairman and CEO of LG Electronics, Koo was previously head of LG International. 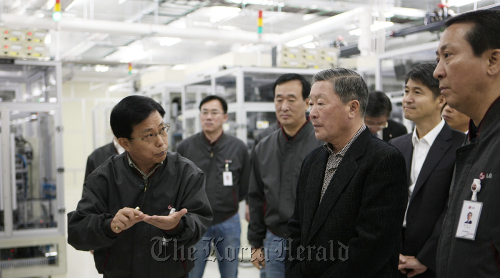 LG Group chairman Koo Bon-moo (third from right) and group staffers examine production lines at LG Display’s LCD module factories in Gumi, North Gyeongsang Province on Thursday. (LG Group)
But before that, his career was mostly devoted to the electronics sector, such as when he served as chief of LG Display. This was when Koo came to be recognized as an executive quick to reach decisions and push forward with controversial yet effective investment schemes.

He also is a member of the founding Koo family, meaning he is in a more convenient position to get the green light for investments, LG Electronics officials noted.

Out of the 21 trillion won LG Group has pledged to invest this year, about two-thirds has already been allotted to LG Electronics.

On Feb.15, the elder Koo traveled to LG Chem’s electric car battery factory in North Chungcheong Province and personally reviewed all the manufacturing and packing procedures.

There, he called on the staff to develop “batteries with higher output, but in smaller sizes” in order to help electric-car makers create better designs for their clients.

Two days later, the LG Group chief headed southward to LG Electronics’ solar battery production lines, and to those at the LG Display building for LCD modules for tablet PCs.

Koo said his firm’s solar battery competitiveness must stay ahead of Japan’s in the face of a low yen era.

Throughout these travels, the LG Group top man’s message to his firm was to keep making bold investments into research and development and also to secure the personnel for steering those projects.

LG is currently in the top spot in terms of electric car batteries, which pulled up its manufacturer LG Chem’s fourth-quarter earnings by more than three times from a year earlier.

In efforts to get out of the doldrums, the firm has been avidly launching smartphones in the hope of selling up to 30 million handsets this year.

The company also has been placing bets on its television business as well, vowing to reduce the gap with Samsung ― the world’s top TV maker ― this year.

Just this past week, LG Electronics released its first 3-D TVs using film-type patterned retarder technology that it said has brighter and clearer 3D vision, in addition to replacing the current bulky, battery-operated 3-D glasses with light-weight eyewear that is easy on the eye.

Samsung Electronics bristled, however, because LG was indirectly taking shots at Samsung’s 3-D TVs, which still use the conventional shutter glass technology that viewers have often complained has flickering and crosswalk.