WASHINGTON (AFP) ― Historic spending cuts approved Saturday by the U.S. House of Representatives face a grim future in the Senate, raising the prospects of a government shutdown and ramping up the public relations blame game.

After a marathon floor debate running well past midnight, the Republican-controlled House voted to cut about $61 billion in government spending. The Obama administration and leaders in the Senate, controlled by Democrats, immediately criticized the move.

“The continuing opposition in the House would undermine and damage our capacity to create jobs and expand the economy,” Treasury Secretary Timothy Geithner said at a news conference after a Group of 20 meeting in Paris. 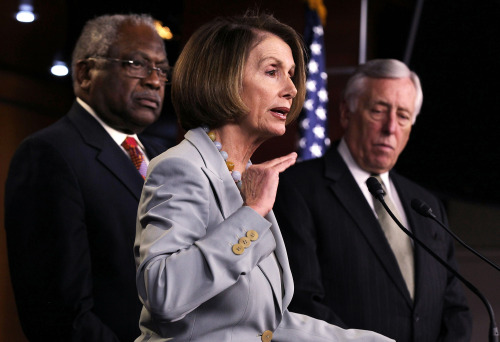 “No responsible elected official should even consider such an option,” Senator Daniel Inouye, who chairs the powerful appropriations committee, said after the House voted 235-189 along party lines.

“The consequences of a shutdown would be immediate and dire.”

House Speaker John Boehner celebrated passage of “one of the largest spending cuts in American history.”

The cuts are “critical to reducing economic uncertainty, encouraging private-sector investment, and creating a better environment for job creation in our country,” Boehner said after the vote.

His office later released an analysis showing only 26 of 127 spending-cut amendments were sponsored by Democrats and “most were symbolic.”

It is “hard to claim your party is focused on ‘job creation and deficit reduction’ when you can’t point to much of anything you were actually willing to cut,” the statement said.

The House voted to scrap funds for a second engine for the F-35 fighter aircraft, eliminate funding for the U.S. Institute of Peace as well as the East-West Center ― which Congress envisioned as a bridge to Asia.

One of the approved amendments would block federal funding for Planned Parenthood, a family planning organization that supports abortion rights. It said the funding cut would be “an outrageous assault” on its clients.

The House and Senate are in recess next week, giving lawmakers a narrow window to reach a compromise and making it increasingly likely that Congress will have to adopt a short-term spending bill.

Boehner has warned, however, that he won’t accept any short-term measure that doesn’t markedly reduce spending ― a step that, if rejected by the Senate, would likely trigger a shutdown.

Before the vote, top House Democrat Nancy Pelosi proposed a bill funding the government through March 31, but her staff later said a shutdown is likely, according to published reports.

Meanwhile, Senate Democrats could approve short-term funding to keep the government running and essentially dare Boehner to reject it.

Obama this week threatened to veto the bill if it undermines national security or economic recovery.

Meanwhile, enough Republicans voted with Democrats to defeat a proposal to withhold dues to the United Nations pushed by Republican Representative Paul Broun, a member of the Tea Party caucus.

They also rejected an amendment to cut $400 million for Afghanistan’s infrastructure, and protected $1.5 billion for Iraqi security forces.

The House also voted to withhold military assistance to Chad because of the African nation’s use of child soldiers.

Democrats said Boehner should have corralled votes to pass a bill that would stand a chance in the Senate.

But Boehner, who became speaker following mid-term elections marked by the Tea Party’s small-government activism, dismissed such talk. He celebrated the fact that nearly 600 amendments were proposed, many by first-time congressmen.

Boehner commended the freshman class for the “commitment and extra effort they put forth to make this momentous debate possible.”