“Prices for everything are going up and it seems it will never stop,” Chu said as she hunted for bargains in a supermarket. “I have no confidence prices can be brought under control this year. I think they will keep going up.”

China’s public is struggling with a months-long surge in food prices that has defied government efforts to combat inflation with interest rate hikes, price controls and a campaign to boost vegetable and grain output.

On Tuesday, the government reported inflation accelerated in January, rising to 4.9 percent from December’s 4.6 percent. That was driven by a 10.3 percent jump in food costs amid tight supplies and strong demand. 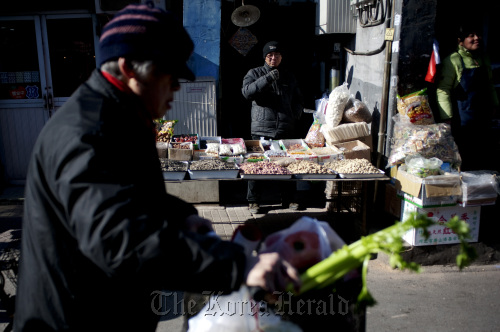 Vendors sell vegetables at a produce market in Beijing. (Bloomberg)
“Inflation is unlikely to come down substantially in the first half of the year,” said Mark Williams of Capital Economics. Analysts expect more rate hikes, but Williams said that on their own, “they aren’t going to bring more crops to the market.”

Inflation is dangerous for China’s leaders because it erodes economic gains that underpin the Communist Party’s claim to power. And it hits the poor majority hardest in a society where millions of families spend up to half their incomes on food.

That is politically awkward as Beijing tries to enforce stability ahead of a once-a-generation handover of power next year to younger Communist Party leaders.

“The political backdrop of the transition is paramount in the policymakers’ minds,” said Dariusz Kowalczyk, senior economist at Credit Agricole CIB. “They realize the poorer people who still are the majority of China’s population are hurt by inflation to a larger degree than they benefit from growth.”

Beijing has tried to mollify the public by paying food subsidies to poor families, holding down prices in university cafeterias and ordering local leaders to see that vegetable markets have adequate supplies. It has tried to diffuse public frustration by claiming hoarding and price-fixing by speculators is partly to blame.

But analysts say Beijing also failed to act quickly enough to head off inflation after it deflected the 2008 crisis by flooding the economy with stimulus money and bank lending. The economic rebound gave consumers more money to spend and banks are pumping out loans despite orders to curb credit.

Beijing has raised interest rates three times since October, but economists say more rate hikes are needed and it will be months before the effect is seen.

“It seems Chinese policymakers are behind the curve in fighting inflation,” Kowalczyk said. “They have been too cautious.”

In January, the price of fresh fruit soared by more than a third from year earlier, while eggs rose by a fifth, the National Bureau of Statistics reported.

At the Xinya Shopping Center, a supermarket on Beijing’s east side, the price of sugar is up 80 percent over a year earlier, while high-quality rice costs 65 percent more, according to manager Wang Yongyi.

“Since the second half of last year, we have been busily changing the price tags to mark the prices up,” Wang said. “It seems that the more control we had from the government, the higher prices rise.”

Inflation could also spill over into higher Chinese export prices. That might raise costs for Western consumers but also could help countries such as Vietnam and India compete with China as suppliers of clothing, furniture and other low-cost goods.

Global Sources, a company that connects Chinese suppliers with foreign customers, said this week that a survey of 232 Chinese companies found 74 percent of them raised prices last year ― some by up to 20 percent ― due to higher costs for materials and components.

“China is steadily moving away from being the world’s low-cost source of various products,” the company said in a report released this week.

Higher inflation also might prompt Beijing to slow the rise of its currency, the yuan, against the U.S. dollar to help its exporters compete. That might add to strains with Washington and other governments that complain the yuan is kept undervalued, giving China’s exporters an unfair advantage and adding to its huge trade surplus.

The government has launched a $1 billion campaign to save the harvest with emergency irrigation and cloud-seeding to make rain.