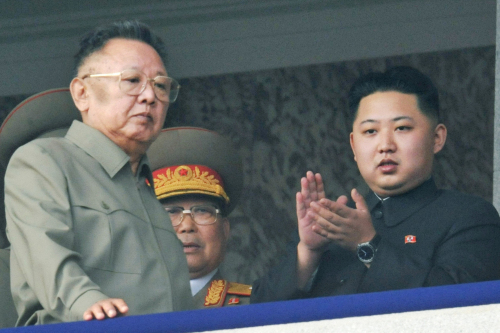 North Korean leader Kim Jong-il and his son Jong-un attend a ceremony marking the 65th founding anniversary of the Workers’ Party in Pyongyang on Oct. 10. (Yonhap News)
"North Korea's nuclear weapons and missile programs also pose a serious threat, both regionally and beyond," National Intelligence Director James Clapper told a Senate Select Committee on Intelligence hearing. "Pyongyang has signaled a willingness to re-engage in dialogue, but it also craves international recognition as a nuclear weapons power, and it has shown troubling willingness to sell nuclear technologies."

The chief spy's remarks are in line with U.S. military leaders.

Adm. Michael Mullen, chairman of the Joint Chiefs of Staff, also said last month that "unless North Korea is deterred, that sometime in the next, I'm not sure but, five to 10 years, the provocations ... will continue at a much higher threat level, which could include a nuclear-capable ICBM (intercontinental ballistic missile)."

The multilateral nuclear talks have been deadlocked for more than two years over the North's nuclear and missile tests and other provocations.

North Korea also revealed in November a uranium enrichment plant that could serve as a second way of building nuclear bombs in addition to its existing plutonium program, despite Pyongyang's claims it is producing fuel for power generation.

Clapper said in a report presented to the hearing that the North apparently has more uranium enrichment facilities than the one in its nuclear complex in Yongbyon, north of its capital Pyongyang, that was revealed last year.

"Based on the scale of the facility and the progress the DPRK has made in construction, it is likely that North Korea has been pursuing enrichment for an extended period of time," the chief spy said. "If so, there is clear prospect that DPRK has built other uranium enrichment-related facilities in its territory, including likely R&D and centrifuge fabrication facilities and other enrichment facilities." DPRK is North Korea's official name, the Democratic People's Republic of Korea.

Earlier in the day in Tokyo, South Korean Foreign Minister Kim Sung-hwan and his Japanese counterpart Seiji Maehara called on the U.N. Security Council to take up the uranium issue for possible additional sanctions on the North, which is already under international sanctions for its second nuclear test and a rocket launch in 2009.

China, North Korea's staunchest communist ally, opposes bringing the uranium issue to the council, citing an adverse impact on the revival of the six-party talks involving the two Koreas, the U.S., China, Japan and Russia.

Beijing wants the talks to reopen as soon as possible without any conditions attached, while Seoul and Washington demand Pyongyang first apologize for the shelling of a South Korean front-line island and the sinking of a South Korean warship that killed 50 people last year.

In an apparent bid to pave the way for the resumption of the six-party negotiations, North Korea recently proposed to revive high-level inter-Korean military dialogue, but walked out of preparatory talks last week citing South Korea's demand for an apology for the provocations.

Philip Crowley, assistant secretary of state for public affairs, urged the North to show sincerity in its denuclearization commitment and address South Korea's grievances before any resumption of the six-party talks.

"We have made clear there are things that North Korea has to do to create the right kind of environment where we think any kind of dialogue would be useful," Crowley told reporters. "North Korea has to demonstrate to the United States and others that it is serious about following through on its commitments. Should they demonstrate that seriousness of purpose, then we'll see what might be appropriate."

A deal signed by the six nations in 2005 calls for the North's nuclear dismantlement in return for massive economic aid and diplomatic and political benefits.

South Korea severed almost all economic ties with the North after the sinking of the Cheonan, which was blamed on North Korea.

Pyongyang denies involvement in the Cheonan's sinking and insists the shelling of Yeonpyeong Island was prompted by the South's provocations on the western sea border.

The North's recent provocations are widely believed to be linked to the ailing North Korean leader Kim Jong-il's plans to transfer power to his third and youngest son, Jong-un, in an unprecedented third-generation hereditary power transition.

The 28-year-old heir apparent, who like his father lacks a proper military background, is believed to be trying to rally support from the military, the only power base in the impoverished but nuclear-armed communist state.

"Despite the most recent launch's failure in its stated mission of orbiting a small communications satellite, it successfully tested many technologies associated with an ICBM," Clapper said.

"Although both Taepodong-2 launches ended in failure, the 2009 flight demonstrated a more complete performance than the July 2006 launch."

Pyongyang is believed to have at least several nuclear weapons, with some experts saying it may have already developed nuclear warheads small enough to be mounted on ballistic missiles with the help of China or Pakistan.

Clapper, however, said that North Korea will not likely use its nuclear weapons against the U.S. unless the North is attacked.

"We judge that North Korea would consider using nuclear weapons only under certain narrow circumstances," he said. "Pyongyang probably would not attempt to use nuclear weapons against U.S. forces or territory unless it perceived its regime to be on the verge of military defeat and risked an irreversible loss of control."