Like many who join large companies in South Korea, Cho Duk-hyun’s career at Daeyang Shipping began with a two-month induction program.

While such programs are often associated with tight schedules that begin at the crack of dawn and continue late into the night, and sometimes include activities with little relation to work such as staging a card section show for the top executives, Cho says that his company’s program was crucial in getting him off to a smooth start.

“We were able to gain basic knowledge about the shipping industry, and experience the corporate culture of the company,” Cho said.

“Every program was helpful for understanding the business, the company, and the people. The knowledge about the industry gained through the program helped us to adapt to an unfamiliar field.”

Such courses most often run for weeks, but some companies are known to put new employees through months of hard training in order to help them hit the ground running when the time comes for them to assume responsibilities.

New employees are trained at the Seven Luck Casino Academy run by GKL in Seoul on Feb. 9. (GKL)
The main objective of induction programs is to help new employees learn what is required of them, and to teach them the basics about the company and its business, as well as to make the new additions feel at home. As such, most companies’ programs include periods of employees staying together at facilities and receiving lectures from experts and those on the job.

“The program gave me a sense of belonging, and pride about the company and as a member of Samsung,” a 24-year-old who recently joined Samsung Electronics said.

“It also allowed the new employees to develop strong bonds, and gave us opportunity to develop teamwork and learn about creating synergy among the members of a team.”

Although not as intensive as those in place at Korean companies, foreign firms here also have induction programs to help new employees get off to a smooth start. 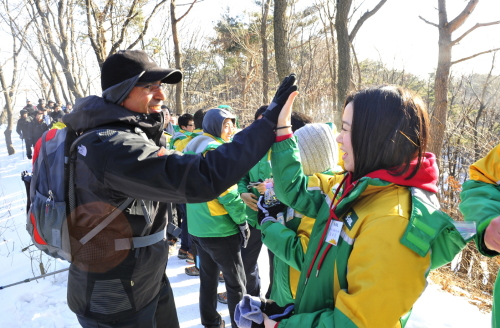 S-Oil CEO Ahmed A. Subey (left) high fives a new employee during a New Year hike in Seoul on Jan. 29. (S-Oil)
“The training was very beneficial. All of the program, from learning about the duties of various teams and my duties, to learning about our products, was very useful,” Lim Eun-ji of Mercedes-Benz Korea said referring to the four-day training program she undertook early on in her career.

“The program isn’t specifically helpful for my current duties, but I think it is very helpful in a more general sense.”

While most programs share the theme of training recruits to cooperate and show them the ropes of the industry, companies have introduced sometimes unusual programs designed to help groom workers who are as closely suited to the job at hand as possible.

At the end of the program, the 29 individuals were taken to Hong Kong and divided into 10 teams that were each given one 200-won (18 cents) ballpoint pen.

The task was to barter the pen to end up with objects of higher value, and according to the company the average value of the final item came in at over 520,000 won, more than 260 times that of the pen they began with.

Others have changed the process for selecting new employees by turning the selection into training. 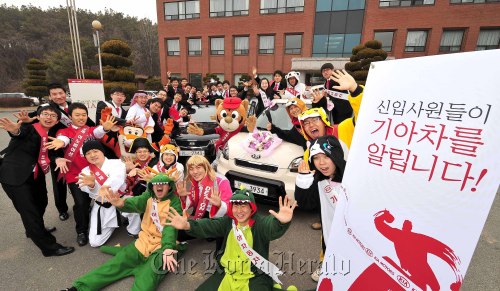 Kia Motors Corp. employees take part in a promotion event in February 2009. (Kia Motors Corp.)
Rather than hiring and then training the new people, Shinsegae Department Store has chosen to select interns who are now on a six-month-long training program, during which they are required to complete various tasks before conducting the final interview.

“Such projects aren’t a fixed part of induction program, but we try to offer new employees a chance to take part in community service projects,” a Renault Samsung official said.

“(Community service) It can help new employees understand the idea that we must live together with others, and that sharing is also a part of a company’s operations.”

“In line with the chairman’s philosophy that employees need to know the site (steelworks), new employees are now required to spend six months at the plants,” a POSCO official said. POSCO’s induction program consists of a week in Pohang, North Gyeongsang Province, two weeks at the company’s training center in Songdo, Incheon and another week preparing new employees for their duties.

“New people also take the ‘Yi Sun-shin leadership tour’ around Tongyeong where they visit historical sites related to his achievements and receive lectures on concerned subjects.”

Yi Sun-shin is a 16th century admiral widely respected in Korea for his exploits in defending the country against Japanese invasion.

Some courses also try to teach the employees the importance of teamwork through physical activities that range from military-style camps run by ex-marines to marches over distances of up to 40 kilometers, as LG Group and CJ Group did with this year’s crop of recruits.

Hyundai Motor Co., which sends new employees to work on the assembly lines for a limited period, also holds training camps in the summer where they take part in activities ranging from hiking to mini-marathons to build teamwork. 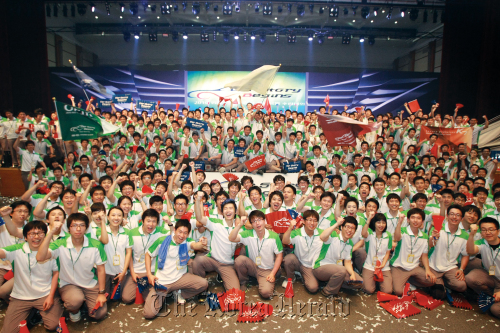 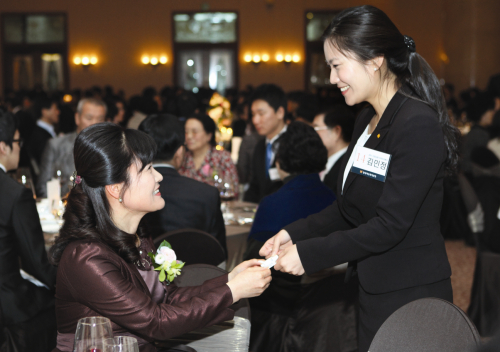 A new worker gives her business card out at a Hyundai Marine & Fire Insurance event on Jan. 29. (Hyundai Marine & Fire Insurance)
With so much of the local business landscape dominated by conglomerates whose businesses often include some very different fields, new employees are often required to undergo programs designed to help them adapt to the corporate culture of the group in addition to the training specific to the businesses of their employer.

However, such Korean-style training programs may not be for everyone.

“If I wanted to join the military, I would have joined the military, not a consumer electronics company,” said a former employee of a local electronics maker, who declined to be named. He added that the grueling schedule that began before 6 a.m. resembled military service, and that at times the program, where everyday was started with the recruits being awakened by the company anthem, seemed to be aimed at “brainwashing” the new employees.

However, even he, who left the company a short while after the end of the program, admits that such the activities were effective in building bonds between the new employees and between them and the company.

“Activities were varied, but designed to increase team bonding, and so it did. People bonded like they were new family ties,” he said.

“Hundreds of kids from all different backgrounds and areas, eventually, by the end of the program, became one.”