A two-day snowfall had just blessed the area with about 60 centimeters of fresh snow just in time for the arrival this week of an IOC team to inspect PyeongChang’s bid to host the 2018 Winter Olympics.

PyeongChang’s bid is based around the Alpensia ski resort in what officials claim would be the “most compact Games in history.”

The resort comprises a large cluster of accommodations as well as a number of facilities, including two 2.5-kilometer-long Nordic courses, a biathlon track and several ski jumps of varying lengths. 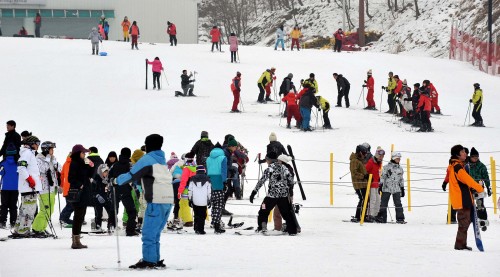 Children enjoy a day of skiing at a resort in Gangwon Province. (Yonhap News)
“There has always been a place to cross country ski around here,” says Wi Jae-wuk, head coach of the Gyeonggi Province Nordic ski team who was here to train his students from schools ranging from elementary to university. The (competition) venue is always changing, and now it belongs to Alpensia,” he said, shaking his head in a slight state of frustration.

Wi, a native of Hoenggye, a small town near Alpensia, has been using facilities in this area for a decade to train his students how to Nordic ski. He has even taken his students to Russia, Japan and China in search of good snow.

Nordic skiing, which began in Norway hundreds of years ago as a means for people to travel across snow-bound terrain, is relatively new to South Korea, but it is slowly gaining popularity here.

As far as winter sports are concerned, mountainous Gangwon Province where PyeongChang is located has traditionally been a leader, but other areas, including Gyeonggi Province near Seoul, have recently done well.

“The big rivalry is between Gangwon Province and Gyeonggi Province,” Wi says. “Gangwon usually wins, but last year, 2010, Gyeonggi ― our team ― won for the first time.”

Not only does Wi coach all manner of kids and young adults, but he competes himself. According to his wife, Park Sun-ju, Wi has “an entire section of his house given over to trophies, both personal, and those that his students won.”

Last Sunday, “Mr. Oh,” owner of a bioengineering firm from Seoul who wanted to go by his last name only, was out at Alpensia enjoying the snow. The son of a diplomat, Oh said he grew up in Norway.

“When I first started, I didn’t like it at the time,” he said, referring to cross-country skiing. “I was much more interested in Alpine skiing as it involves going downhill fast.”

He lauded the joy of Nordic skiing, saying that he comes out almost every weekend.

“I belong to a mountain bike club, and we aren’t able to ride every day in the winter, so I go Nordic skiing in order to keep my health up. It’s good aerobic exercise,” he said.

This July, the International Olympic Committee will report from Durban in South Africa whether PyeongChang will get the nod to host the 2018 Winter Olympics. If it does, Nordic skiing may explode in popularity, and more venues may open up.