North Koreans greeted the 69th birthday of their “Dear Leader” on Wednesday, their deepening food shortages and apparent hunger momentarily forgotten amid hordes of flowers and neon signs, which light up the usually bare streets.

Images released by the North Korean media this week showed handouts and posters advertising a slate of festivals prepared to celebrate the birth of leader Kim Jong-il.

The North’s official Korean Central News Agency aired a message praying for Kim’s health and longevity Wednesday, saying the healthy leader will secure “eternal happiness and victory” for the people.

“Most of the events are hardly affordable for the country which is desperate for outside food aid and has halved the size of its capital for financial reasons,” a Seoul official said on the condition of anonymity.

“Still, Kim Jong-il can’t go light on the celebrations,” the official added. “The last thing he would want is to give his people the image he is losing the ability to celebrate his own birthday.” 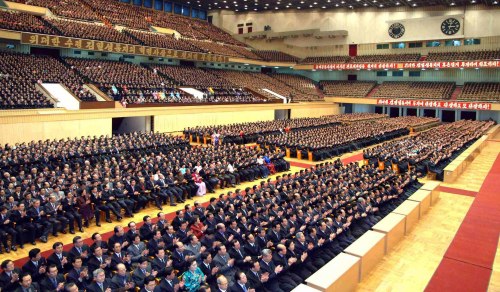 People attend a meeting celebrating the 69th birthday of North Korean leader Kim Jong-il in Pyongyang on Wednesday. (Xinhua-Yonhap News)
Although he is believed to be a year older and to have been born in the now-defunct Soviet Union, the official biography of Kim claims he was born in 1942 on the North’s highest peak, Mount Baekdu.

The birthdays of North Korean founder Kim Il-sung and incumbent leader Kim Jong-il are considered two of the most important national holidays in the communist state.

Wednesday was Kim’s first birthday celebration since he officially tapped his 20-something son, Kim Jong-un, as successor, elevating him to high military and party posts. The 69-year-old dictator apparently suffered a stroke in 2008 and hasn’t fully recovered his health, judging by recent images.

Although North Koreans approve of the hereditary power transition on the surface, many question the capability of the young heir apparent, especially as food shortages deepen.

The North’s central television station said airplanes were flown to send gifts to children living on islands off the west coast to mark the leader’s birthday, but the Seoul government said it was “unclear” whether the usual food and gifts were given out to people this year.

Additional food rationing on the leader’s birthday is considered by the Kim regime as one of the most effective ways of appeasing the hunger-stricken people and renewing their loyalty, analysts say.

A source in North Korea had told Open Radio for North Korea earlier this week that the North Korean regime appears to be making “immense effort” to secure enough food to distribute on Kim’s birthday.

North Korea is one of the poorest countries in the world and its economic difficulties have deepened since it conducted two nuclear tests in 2006 and 2009, leading to tougher international sanctions and economic isolation. The World Food Program believes some 5 million North Koreans will suffer from the food shortages this year.

The reclusive state, which rarely reveals its circumstances to the outside world, has been reaching out to the international community to help overcome its food problems.

Seoul and Washington, however, remain skeptical toward providing aid, demanding an apology for last year’s military provocations and a new pledge to denuclearize.

North Korea also halved the size of its capital Pyongyang, according to 2009 and 2010 almanac maps from the country, a choice made in a possible bid to ease the burden of keeping the loyal residents of the city well-fed amid deepening food shortages.

The city of 3 million has relinquished most of its southern half and a portion of its west to surrounding areas, excluding some 500,000 people as Pyongyang citizens since 2009.

The move could ease the Kim regime’s burden in feeding the people who live in the capital, analysts say.

Located in the southwest region of North Korea, Pyongyang is home to power elites and officials who rule the country through a military-first policy. Pyongyang citizens and the military in North Korea are known to enjoy special privileges and lead luxurious lives while people in other parts of the country rarely have more than two meals a day.

Meanwhile, activist groups here floated anti-North Korean propaganda leaflets across the inter-Korean border on the occasion of the birthday of Pyongyang’s “omnipotent” leader, criticizing the father-to-son succession and calling for an uprising by the people.

The Network for North Korean Democracy and Human Rights said it sent some 100,000 leaflets in balloons into North Korea.