Accompanied by around 20 people, the casually-attired Kim, born in 1981, was seen taking photos during the performance of the British musician in a video clip released by local media.

Kim was also spotted by the Japanese media in 2006 before an Eric Clapton concert in Germany. In 2008, he invited the musician for a performance in Pyongyang through the North Korean Embassy in Britain. 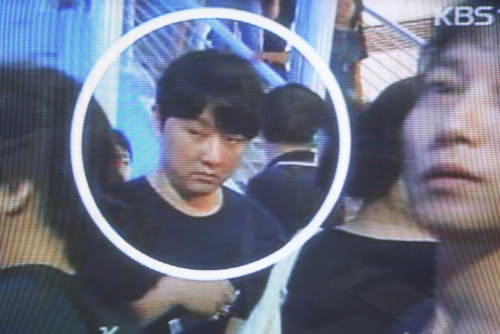 North Korean leader Kim Jong-il’s second son Jong-chol was seen at an Eric Clapton concert in Singapore on Monday, as depicted in this video clip grab released by KBS on Tuesday. (Yonhap News)
During his stay in Singapore, Kim stayed in a $535-a-night hotel room and bought a high-priced diamond, according to reports.

After the concert, Kim is said to have left the country for Beijing where he boarded a plane bound for Pyongyang.

His appearance in Singapore sparked public criticism here that the North Korean leader’s family is living a lavish life while ordinary citizens are leading a hand-to-mouth existence.

It also raised the suspicion that Jong-chol could be biding his time overseas in the same way his older brother Jong-nam has been since the two lost to the leader’s youngest son Jong-un in the competition for the leadership.

Pyongyang recently made it essentially official that Jong-un, who has been given top posts in the ruling party and the military, is to succeed his ailing father.

Jong-nam, born in 1971, was often considered the most likely son to succeed North Korean leader Kim Jong-il. That was until 2001 when he got caught trying to enter Japan on a forged Dominican passport at Narita Airport.

The incident apparently made him fall out of his father’s favor. Since then, Jong-nam has spent his time in mainland China, Hong Kong and Macau.

After Jong-nam was shunned, it was widely expected that Jong-chol would be the next in line for the throne. However, his apparently weak and feminine personality reportedly failed to win his father’s trust.

In several media interviews, Jong-nam indicated that he opposes the ongoing second hereditary power succession in the North. Due in part to such moves, there has been speculation that Jong-un has envisioned assassination schemes against Jong-nam.

There were also similar struggles over the throne in the process of Kim Jong-il taking the helm of the communist state.

After being picked out as successor in the 1970s to his father and the republic’s founder Kim Il-sung, Kim Jong-il went on a sweeping purge to remove potential political threats.

Kim Jong-il removed his half-brothers Pyong-il and Yong-il from the political center in Pyongyang by sending them abroad for good.

Young-il died of lung cancer while serving as an advisor to the North Korean diplomatic mission in Germany.