A smart choice for poor guitarists who have nowhere to practice but their tiny rented rooms: a Yamaha guitar whose volume can be adjusted and has a headphone output so that neighbors will not be disturbed.

An electronic piano by the same Japanese company, which looks like a grand piano with at least two thirds of its back part cut off, will also come in handy in the narrow homes of Tokyo. It could be pushed against a wall and take up very little space.

Both products can be found at the exhibition “WA: The Spirit of Harmony and Japanese Design Today,” currently underway at the Korean Foundation Cultural Center in Sunhwa-dong, central Seoul. The show explains why adjectives such as “minimal,” “delicate” and, surprisingly, “thoughtful,” cannot help but be used to describe products made in Japan.

“The spirit of ‘wa,’ or harmony in Japanese, is to blend conflicting concepts like traditional craft and high technology or Japanese and Occidental, and sublimate them into a higher dimension. This spirit is the foundation of the dynamism found in contemporary Japanese product manufacturing,” said Noriko Kawakami, curator of the exhibition, at the exhibition opening Friday.

“This exhibition is a little different from those that introduce cutting-edge designs. It does introduce designs from after 2000 but mostly consists of historically important designs that were created over 50 years ago and are continuously used by the Japanese in their everyday life.” 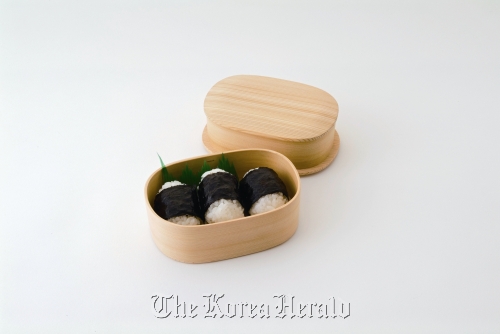 Found at the crossing point of “Stationery” and “Thoughtful” is a thumbtack named “Soft Pin,” produced by KOKUYO S&T Co. Unlike regular thumbtacks, “Soft Pin” has a centimeter-wide rubber ring that encircles the pin part to protect your fingers from being pricked when they are not being used. To stick it on, one can simply push the pin through the rubber ring.

“Little Baker Boya,” included in the “Cute” and “Tableware” categories, is an adorable green kitchen utensil holder that looks like a worker wearing a safety helmet. It was produced by Lampas Inc. 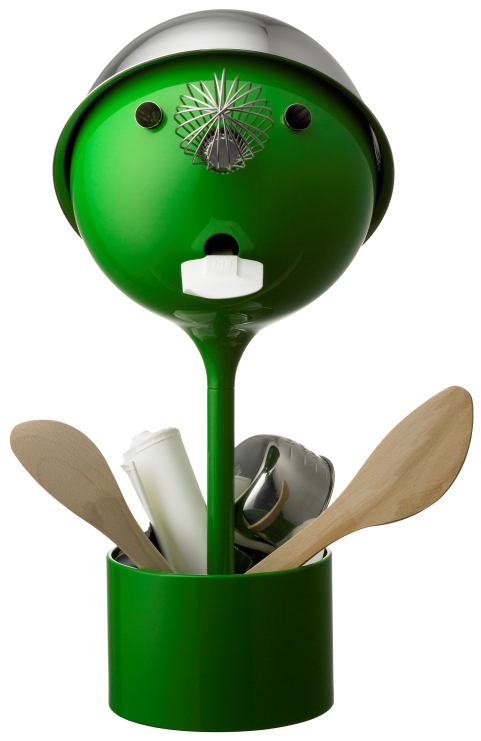 “Little Baker Boya,” a kitchen utensil holder (The Korea Foundation)
Exhibits also include design products that are over half a century old, such as the commonly used “G-type Soy Sauce Bottle” by Hakusan Porcelain Co. which was first produced in 1958 and “Elephant Kumiki,” a wooden elephant-shaped block toy produced by Yamanaka Kumiki Works in 1931.

Organized by The Japan Foundation and Public Information and Cultural Center Embassy of Japan, the touring exhibition first kicked off in Paris, France, in 2008. It toured around different cities in Europe and came to Korea, which is the final stop before ending its journey in Tokyo later this year.

Here, the exhibition is co- hosted by The Korea Foundation and is held as part of the two Japanese organization’s cultural project for 2011: “The New Era: Korea-Japan Collaboration for the Future.”

Another art show included in the project is “Seoul Square Media Canvas 2011 K-J collaboration,” which can be spotted on the gigantic screen on the hard-to-miss Seoul Square building right across from Seoul Station in central Seoul at nighttime. 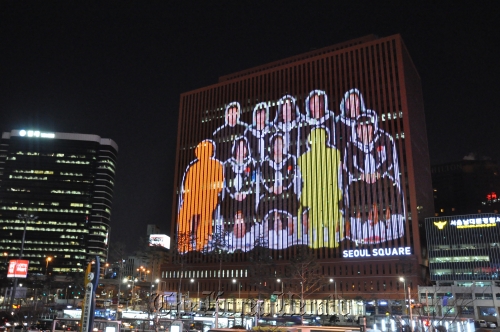 The wall of Seoul Square shows a scene from “With or Without you” by Mioon (Gana Art Center)
The screen has been showcasing media works by various artists from 6 p.m. to 11:30 p.m. since Nov. 2009. On every Tuesday, Thursday, Saturday and Sunday until March 31, the screen will be showcasing collaboration works by two teams of Korean and Japanese media artists.

Masayuki Akamatsu from Japan and Yang Min-ha from Korea, who form the first team, each searched to find Korea in Japan and Japan in Korea, respectively, to express how each culture was being accepted in the other.

“I feel dizzy when I visit Korea, as if I had been dropped into a parallel world. It is because the view of the streets and the people are very similar (to that of Japan) but are also clearly different in some parts. Finding such similarity, difference and the merge of the two is a very provocative and important work,” said Akamatsu.

Mioon used group photos from each country for the project.

“The image of figures in group photos reveals more than simply help remembering the past. Being included in a group has a more special meaning in both Korea and Japan than in other cultures,” said Mioon.

The exhibition “WA: The Spirit of Harmony and Japanese Design Today” runs through March 19 at the Korea Foundation Cultural Center in Sunhwa-dong, central Seoul. Admission is free. For more information, call (02) 2151-6500 or visit www.kfcenter.or.kr.