Kaspersky, who founded the leading anti-virus firm Kaspersky Lab, said there is only “one company, one operating system which follows Microsoft’s strategy of the 1990s” when its Windows computer operating system became dominant on personal computers.

“I believe that if Apple, BlackBerry, Microsoft ... don’t change their strategy very soon we will soon have the same mobile operating system landscape as we have with computers,” he told journalists on the sidelines of the mobile phone industry’s annual get-together in Barcelona. 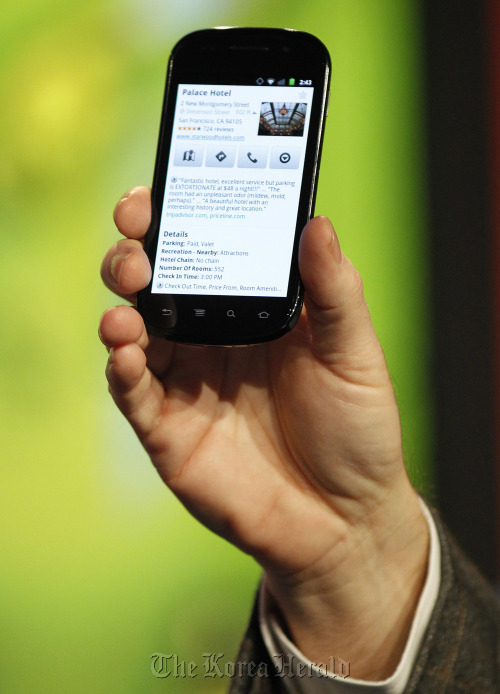 Eric Schmidt, CEO of Google Inc., holds up his phone running Google’s Android OS during the Web 2.0 Summit in San Francisco. (Bloomberg)
Kaspersky predicted Android would eventually end up with 80 percent of the smartphone market, with Apple’s iPhone and RIM’s BlackBerry sharing the rest with 10 percent each.

Android dethroned Nokia’s Symbian as the top smartphone operating system in the final quarter of 2010 by units shipped, according to market research company Canalys, with its market share leaping from 8.7 percent in 2009 to 32.5 percent last year.

Kaspersky’s forecast comes amid a major shake-up in the smartphone market.

Nokia, which had difficulties mounting a response to the rise of Android and Apple’s iPhone, announced last week it was phasing out Symbian and switching to Microsoft’s Windows Phone 7 smartphone operating system.

Kaspersky said Microsoft was not repeating for mobiles the strategy of working closely with developers that ensured the success of Windows for personal computers but was instead keeping tight control over Windows Phone 7 like Apple does with its iOS.

“They are going the Apple way ... I don’t really believe they will have success,” he said. “Maybe Nokia will force them to be open.”

Both Microsoft chief Steve Ballmer and Nokia’s Stephen Elop have emphasized here at the Mobile World Congress they intend to work closely with developers to ensure that outside developers create lots of applications for Windows Phone7 to ensure its popularity with consumers.