“The places I often go to have become very special to me. These are beautiful places packed with awesome memories,” said Les Timmerman, an expat who has been climbing here for over 4 years.

However, as everlasting as the rock may seem, a lack of care or sense of responsibility can quickly ruin the climbing experience for all. Hence the “leave no trace” code of ethics in the international climbing community, which can be difficult to practice when flakes crack, chalk defaces and holds break.

Grateful for the experiences given by the crags here, a group of expat climbers has found a way to give back to both the mountains and the local climbing community. 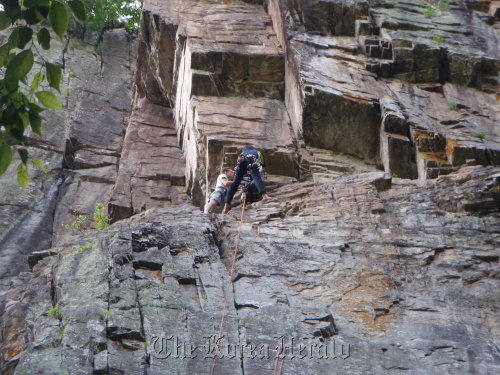 Alec Furguson (left) and Cho Han-ik replace the safety equipment at Yeongseo Falls in South Jeolla Province. (Shim Seon-hwa)
Korea on the Rocks initiatives aim to honor the rocks by learning from the existing local community, cleaning up, and offering manpower to help maintain climbing areas throughout Korea, for future generations.

Understanding that the expat community will always come and go, the KOTRi has done its best to develop the scheme with guidance from the Korean community.

The KOTRi is an organization which branched out from the go-to forum for expat climbers in Korea, Korea on the Rocks. Formed by Bryan Hylenski, climbers take time out of their busy schedules to volunteer, set up logistics, prepare initiatives, and go out to use a little elbow grease.

Its first initiative kicked off at Yeongseo Falls in South Jeolla Province. Teamed up with the Ackdong Climbing Club, the local climbing community, the KOTRi was able to replace dangerous safety equipment, start a trail restoration project, and translate menus and information to help local lodges deal with foreign visitors.

The KOTRi provided equipment and manpower to do maintenance work on over 20 routes in the area, and worked with the Korean community by letting the locals take the lead in the project’s direction. It also showed the expat community how Koreans preferred things to be done when replacing bolts and anchors.

The aforementioned safety equipment was drilled into the wall at Yeongseo during the 1990s, but has since become weathered, worn and dangerous, allowing the possibility of a bolt breaking off, which could cause a fatal accident.

Recognizing the potential problems in the trail that leads up to the climbing area in Yeongseo, the KOTRi set about restoring the trail into a stone staircase, creating a safe and easy access to the rockface.

By this March, the KOTRi plans to finish the initiatives in the Yeongsu Falls area, complete a recycling program, install an environmentally safe toilet and continue cooperating with the Akdong Climbing Club to maintain the area.

And according to Timmerman and other members, the KOTRi has been well received by the Korean community.

“As KOTRi and its activities became more well known, climbing clubs from other areas contacted us saying that they were impressed and wished to team up for other projects,” said Shim Seon-hwa, a Korean member of the KOTRi.

“I met members of the KOTRi at Yeongseo falls during our maintenance projects, and I was impressed by their love of both nature and the rocks,” said Cho Han-ik, member of the Akdong club.

“The members of KOTRi that I have seen went beyond simply using the crag for their enjoyment, and I was again impressed that they took the initiative to clean up the crag,” said Cho who headed the Korean side of the initiative at Yeongseo.

To kick off the New Year, the organization has decided to work in the Munsusan area, and is discussing the details with Choi Byeong-ho, manager of the area. According to Hylenski, the Korean community will teach the KOTRi how to preserve the area and how to replace the safety equipment, or bolts and anchors.

“We will also be donating a large amount of the cost to purchase the bolts, hangers, chains and anchors for this project,” Hylenski told the Korea Herald.

The KOTR forum was started in 2004, and provides information on some 268 climbing areas throughout Korea to more than 1,200 members.

“Through the love we share for climbing, we understand and overlook the differences, helping us overcome all cruxes, despite the language barrier and different in culture,” said Shim, who joined the KOTRi to bring the two communities together.

The KOTR are always looking for climbers and volunteers from both the foreign and Korean climbing community.