He holds a BA and a master’s degree in political science from Yonsei University and a Ph.D. in journalism from Hanyang University. 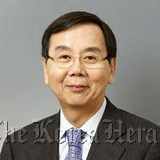 Lee Soon-dong
The 64-year-old new chairman started his career with a JoongAng Ilbo journalist in 1972, and later moved to Samsung Group, holding various positions including president of strategic planning office, president of Cheil Worldwide, and president of Samsung Volunteers Group.

“I will make efforts to turn the public perception of advertising from negative to positive, and focus on communicating with the authorities concerned as well,” Lee said in his inauguration speech.