Allen became the NBA’s career leader in 3-pointers in the first quarter, but Bryant later put him on the bench in foul trouble during his big second half that rallied Los Angeles from an early 15-point deficit.

Pau Gasol added 20 points and 10 rebounds for the Lakers, who split the regular season series with their biggest rivals and got a sorely needed victory against one of the league’s top teams. Andrew Bynum, the subject of trade rumors in the never-ending Carmelo Anthony saga, finished with 16 points and nine rebounds.

Paul Pierce had 15 points for the Celtics, who came in shooting an NBA-best 49.7 percent and shredded the Lakers for 60 percent shooting in their 109-96 victory at Los Angeles on Jan. 30, but went cold after a strong start in this one and finished at 40 percent. 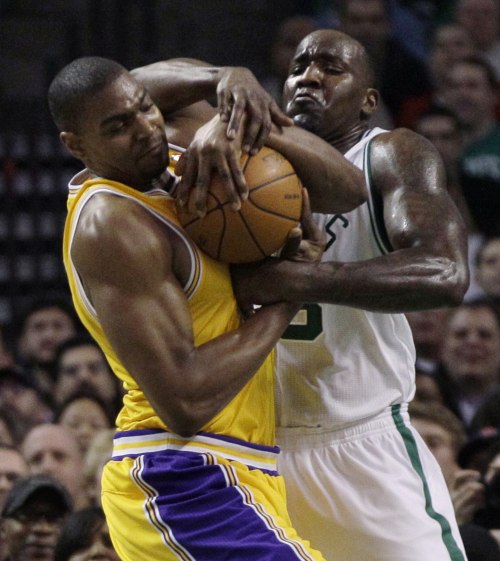 Boston Celtics center Kendrick Perkins, right, tussles for the ball with Los Angeles Lakers center Andrew Bynum during the first quarter of an NBA basketball game in Boston, Thursday. (AP-Yonhap News)
Bryant scored 41 points in that loss, but seemed headed nowhere near it after taking only three shots in the first half. He had a quick flurry out of halftime, then had eight points in the final 4:51 to help the Lakers hold on.

Lamar Odom finished with 10 points, 12 rebounds and one headache for the Lakers, who moved to 3-0 on their seven-game Grammys road trip that continues Friday in New York.

Down eight at halftime, Los Angeles return from the locker room with a 10-0 burst, and it was back and forth the remainder of the third quarter. The Lakers scored six consecutive points late in the period, the last two in painful fashion after Odom tipped in Gasol’s miss, then their heads collided as they turned to run downcourt. Los Angeles led 72-68 after three.

Sporting a large bandage on his forehead, Odom opened the fourth with a 3-pointer, but the Celtics were only down three midway through the period before Bryant made two jumpers and a layup to push the lead to 88-79 with 3:12 remaining. Boston got back within five, but Bryant found Gasol for a bucket underneath, then finished with off with a jumper with 48 seconds to play.

It gets no easier for the Celtics, who host Miami on Sunday in a showdown of Eastern Conference powers.

Allen tied the record with his first 3-pointer with 4:14 left in the first quarter, but missed on the next possession with the crowd ready to roar. He nailed the record breaker with 1:48 to go, taking a pass from Rajon Rondo as he trailed on a delayed break and pulling up from the right wing for a 22-14 lead.

Allen had 12 points in the period, then was honored during the break with a loud, standing ovation. He hugged Miller, then his mother before going into the crowd to see his family. A video montage in the second quarter showed highlights from his earlier years in Milwaukee and Seattle.

It seemed there’d be plenty of time for celebrating his big night when the Celtics rolled to a 15-point lead on Allen’s dunk with 5:28 left in the half. But the Lakers ran off 10 in a row later in the half and were down only 53-45 at halftime.