He plays Ben Donovan, the manager of a big San Diego sports arena, the Sunshine Center, which hosts a variety of attractions.

“Every night, 17,505 people come here expecting to have a good time,” Ben declares. “And I make sure they do.”

But there are also a host of attendant wacky problems. On the series premiere (Wednesday at 9:30 p.m. EST), the circus is booked, but the ice from the previous night’s hockey game isn’t melting. Oh, and an elephant is lost in the building.

Meanwhile, Ben has hit his 40th birthday. It is a wake-up call.

Suddenly, he sees he is not as happy as he had thought. 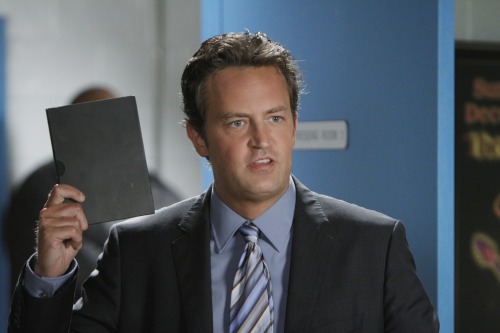 Matthew Perry portrays Ben Donovan in a scene from “Mr. Sunshine,” premiering Wednesday on ABC.  (AP-Yonhap News)
“He’s a solipsistic, self-centered man,” says Perry. “But his eyes get opened a little bit, and he realizes that the ticket to being happy and having some kind of inner peace in his life is to stop thinking about himself all the time, and maybe think about his fellow man.”

With Ben at its, well, heart, “Mr. Sunshine” will deal with his blundering efforts to transform himself into someone more caring and willing to commit.

Ben is joined by a crew of zanies at the Sunshine Center, most notably his boss, Crystal, the arena’s erratic and highly inappropriate owner, who is played by Allison Janney (“The West Wing”).

Janney, says Perry with a sly grin, “is up for anything. One of the character traits she chose for Crystal is ... to slap me across the face. That became a running gag.”

In first confronting Ben, a viewer will likely draw comparisons with Chandler Bing, the character Perry played on his landmark comedy, “Friends.”

“Ben is a little bit more beaten down by life,” says Perry.

“Chandler was very high-energy, sort of bouncing off the walls.

This guy is a little more grown-up.”

But Chandler grew up through the 10 seasons of “Friends.” At first romantically challenged (and covering up his insecurities with self-targeted quips), an older, wiser Chandler was happily wed to fellow friend Monica (Courteney Cox) by the series’ end in 2004.

Maybe Ben Donovan can look forward to similar personal growth amid the chaos of “Mr. Sunshine.”

But he has also got a job to do ― “Mr. Sunshine” is, after all, a workplace comedy, where Ben has a comic function similar to Chandler’s, cracking wise about the madness that surrounds him.

The Sunshine Center can provide him lots of material.

“When you’re trying to think of somewhere to set a comedy, you want a place where a lot of funny things can happen,” Perry notes.

“If you go online and look at an events list at a place like Madison Square Garden or Staples Center, you’ll be amazed at what’s happening on the nights that aren’t the big-ticket nights ― things like lingerie football and cat shows and bizarre religious leaders.”

The idea for “Mr. Sunshine” was Perry’s, and he shares the show-running task and participates in writing, among his many duties.

“I thought it’d be an interesting challenge to be at the creative center of a show,” he says.

“Mr. Sunshine” is Perry’s first TV series since “Studio 60 on the Sunset Strip,” an acclaimed but little-watched drama created by Aaron Sorkin that lasted just a season on NBC four years ago.

Perry says he has been developing “Mr. Sunshine” for nearly two years.

“I’ve learned how much goes into making a television show, and there’s a lot more than I thought.

“In my early 20s,” Perry, 41, recalls, “I was mostly thinking about myself. I thought the first day of a project was the table read. I thought, `Well, I’m here, so this must be the first day’ ― not knowing that a whole year of development, of driving across town to meetings, had taken place.”

Now, with all 13 episodes of the first “Mr. Sunshine” season wrapped and ready to air, Perry is catching his breath from his eye-opening list of responsibilities. But he is already gathering ideas for a second season he hopes is in store.

“When I was on the set of `Studio 60,’ I used to look over and see Aaron Sorkin sort of mumbling to himself in the corner of the room,” Perry says. “He was playing out scenes from future episodes, doing all the parts. I am nowhere near the writer that Aaron Sorkin is, but I certainly do mumble in the corner of rooms.”