Their agency, Cube Entertainment, said Monday that the award was presented to the five-piece group in Tokyo’s Midtown Hall in recognition of their prominent performances as Korean singers who debuted in Japan last year. 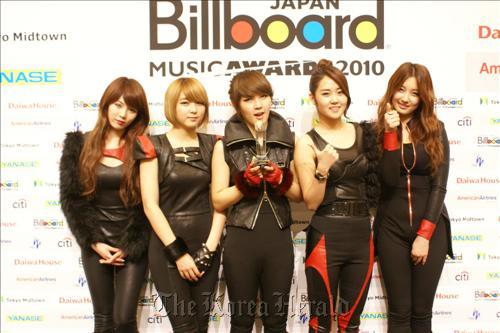 4Minute at the Billboard Japan Music Awards 2010 in Tokyo on Sunday.  (Yonhap News)
At the three-hour show, the girls sang their hits, “First” and “Muzik,” to screaming fans. Currently, 4Minute is preparing to release their Japanese single, “Why,” next month.

The event brought together pop singers from Japan, South Korea and the United States, including Nick Carter of the Backstreet Boys and J-pop boy band EXILE. The show was aired by Fuji TV.