Rival parties are at odds over holding an extraordinary National Assembly session this month and a meeting between President Lee Myung-bak and opposition party leader, while a group of governing party lawmakers push for Constitutional amendment.

Floor leaders Kim Moo-sung of the ruling Grand National Party and Park Jie-won of the main opposition Democratic Party agreed Sunday to open the parliament next Monday and make efforts to hold talks between Lee and DP chairman Sohn Hak-kyu this week. 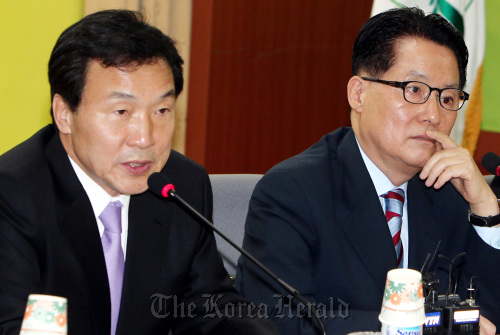 Sohn Hak-kyu, leader of the main opposition Democratic Party, addresses a party meeting Monday. (Yang Dong-chul/The Korea Herald)
As Kim and Park made the announcement, however, the presidential office told the DP that the talks shouldn’t be rushed, prompting the DP to reverse its position.

Having called on the president to apologize for the GNP’s railroading of the state budget bill late last year, the DP said it was opposed to normalizing the National Assembly unless Lee states his position on the bill’s handling.

“We will decide whether to attend the National Assembly after the presidential office and the GNP draw a unified position.”

DP’s chairman Sohn Hak-kyu insists that the parliament can be normalized only after Lee expressed regret over ramming through the budget bill.

The GNP’s Kim reiterated Monday that the talks between Lee and Sohn should take place as early as possible.

But he said there is no reason for the president to apologize for something that happened in the National Assembly.

Lee’s spokesperson Kim Hee-jung said Monday that working-level discussions between Cheong Wa Dae and the DP to prepare for the talks were underway.

Meanwhile, a majority faction within the GNP is bracing to finalize the party’s position on the constitutional revision this week despite differences with a smaller group that supports President Lee’s political archrival, Rep. Park Geun-hye.

The so-called pro-Lee majority is set to propose organizing a taskforce and a parliamentary committee for the constitutional amendment during a three-day general meeting of GNP legislators that starts on Tuesday.

The pro-Lee group calls for a shift from the current five-year, single-term presidency to a system where the president shares more of his authority with the prime minister. Minister of Special Affairs Lee Jae-oh and GNP chairman Ahn Sang-soo are leading the drive despite views that it is too late to start talks for a constitutional revision as parliamentary elections are only about a year away. 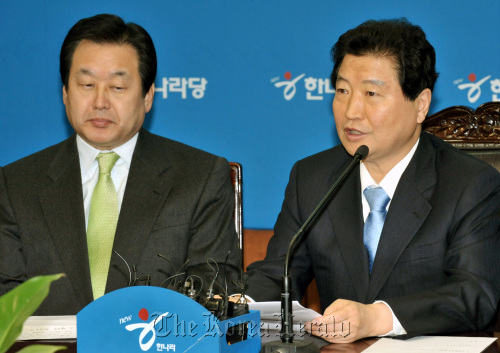 Rep. Ahn Sang-soo, chairman of the ruling Grand National Party, speaks during a meeting of senior party officials Monday.
The pro-Park faction has suspected the pro-Lee majority is trying to keep Park in check should she become president. The former GNP chairwoman is currently the party’s strongest presidential hopeful. Park wants a four-year, two-term presidency.

The DP dismissed the drive for constitutional revision as the “pro-Lee faction’s strategy for survival” in case it loses the next presidential election.

“Whatever conclusion is drawn in the GNP’s general meeting, the DP will not take part in the parliamentary committee for constitutional amendment,” DP floor leader Park said.

“The people have no interest in the issue. The ruling party should focus on legislation to improve the livelihoods of the people, resolve inter-Korean problems and settle the (location of the) science-business belt.”