Korean inflation accelerated for the second straight month in January, breaching the central bank’s 4 percent ceiling and adding to the case for another increase in borrowing costs.

According to the report by Statistics Korea, the country’s consumer price index surged 4.1 percent last month from a year earlier, mainly due to a rise in agricultural and energy-related product costs.

The figure is up from the 3.5 percent rise in December and equal to the 4.1 percent increase reported for October. 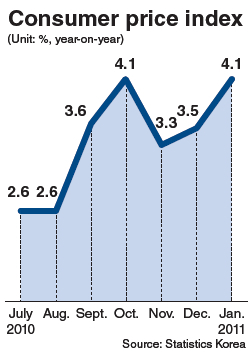 The data added to concerns that mounting inflationary pressure could undercut the nation’s economic recovery, a government report showed Tuesday.

“A prolonged cold spell, outbreaks of foot-and-mouth disease and rising oil prices contributed to a stronger-than-expected shock from the supply side,” said Yoon Jong-won, head of the finance ministry’s economic policy bureau.

“Agriculture prices are not expected to stabilize until the end of the first quarter. But they will get some stability after the month as supply shortage problems could be eased somewhat,” he added.

The consumer inflation is expected to hover at the 4 percent range in the current quarter before softening to the 3 percent level in the second half, he said.

“We see consumer price inflation staying at around 4 percent during the first quarter. But if the impact of cold weather eases from the second quarter, inflation will likely stabilize to the 3 percent level in the second half.”

President Lee Myung-bak said on Tuesday the government is considering lowering both or either import tariffs and domestic sales tax on oil products as part of efforts to curb rising inflation.

“The government is currently looking into lowering tax and import tariffs on oil products,” Lee said during a televised interview on the economy and diplomacy.

Lee launched its “all-out” efforts to keep prices under control since the start of this year for fear that price instability could undercut its strong but still fragile economic recovery.

The government has unveiled diverse measures such as easing import taxes on basic goods, unloading its stockpiles of agricultural products and cracking down on price-rigging in the corporate sector that it fears could lead to a rise in consumer prices.

Last month, the government also decided to freeze major public service charges and college tuition fees during the first half to preemptively keep inflation under control.

However, cold weather, spreading FMD and spiking raw material prices are dealing a blow to the government’s efforts by driving up food prices and hurting the livelihood of low- and mid-income people.

Rising crude prices are emerging as yet another risk factor as Korea depends almost completely on oil imports for its energy demand.

According to the report, prices of fresh agricultural and food products jumped 30.2 percent from a year earlier with oil and energy costs moving up 10.9 percent.

Prices of cabbage and spring onions spiked 151.7 percent and 108.2 percent from a year earlier, while pork prices also rose 11.7 percent, mainly affected by a massive slaughter of pigs amid the fast spread of FMD.

Prices of key food materials will likely get higher as demand is expected to increase ahead of Lunar New Year’s Day this week, as people will have family gatherings to mark one of the nation’s largest holidays, experts say.

“Against this backdrop, consumer prices will likely slightly surpass the objective this year,” Yoon of the finance ministry said. “But the impact of the government’s move to freeze tuition and public service fees will likely materialize from next month.”

Korea’s government is seeking to keep inflation at around 3 percent this year compared with last year’s 2.9 percent increase.

It also aims to achieve 5 percent economic growth this year, a target that many experts see as “too optimistic” under the current economic conditions at home and abroad.