HONG KONG ― If anyone could perfectly understand and satisfy two totally different palates from East and West, it could be Jeannie Cho Lee, the first Asian Master of Wine.

Lee was born in Korea but has lived in numerous cities in the world including New York, Boston, London and Kuala Lumpur. Such a life opened her mind to different languages, cultures and tastes, though she never forgot her roots; she is still fluent in Korean and fully understands the culture of her homeland.

Lee is currently working as a wine critic, consultant and educator based in Hong Kong, one of the world’s most international cities which overtook New York as the world’s largest wine auction center many years ago. She flies off to wine countries all over the world each year ― at least three times to Europe and several times to other destinations like Chile and New Zealand ― to taste and discover hidden gems. 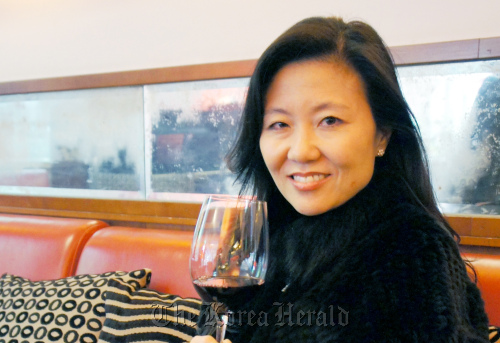 Jeannie Cho Lee, the first Asian Master of Wine (Park Min-young/The Korea Herald)
Which one has been her favorite so far?

“It is like asking a woman which is your favorite pair of shoes! Would you be able to answer that? It depends on the season, on who you are going to meet … and even if there is one at the moment, it could change in a few months,” Lee told The Korea Herald, giggling.

Lee fell in love with wine in Britain, where she attended Oxford University for a little over a year as an exchange student from Smith College in Massachusetts, United States. Since then, she was always on the lookout for good wine classes.

Wine was still just a hobby during the early years of her career starting out as a business journalist. But the international press must have smelled her passion for drink and food ― she also has a certificate from Cordon Bleu ― because many started to contact her as soon as the Asian economic crisis of the late 1990s gradually cleared up and interest in wine grew in Asia.

“They asked, ‘Can you write us a wine story?’ and I started to get many commissions. My first daughter was born then anyway, so I started freelancing,” said Lee.

Lee soon decided to turn her career completely. She started the course to obtain Master of Wine, which is known to be one of the world’s most difficult diplomas to obtain with a passing rate below 20 percent. After years of tireless studying and perking up her senses, she earned the accreditation as a Master of Wine in 1998. The title has been given to a mere 288.

“I know that I am lucky. The generation in front of me in Asia couldn’t have done it. Either you sold wine or served it. But neither would have interested me. Being a communicator of wine is a new concept in Asia,” said Lee.

Her biggest achievement as a Master of Wine so far is her book, “Asian Palate: Savoring Asian Cuisine and Wine,” which was published in November 2009.

It won the Gourmand Award’s Best Food and Wine Pairing book in the World against nearly 6,000 other books from 136 countries and was also short-listed as one of the four books considered for the prestigious Andre Simon Food Drink book awards in 2009.

“There aren’t many books on Asian food and wine. It is a combination of a trendy and a novel concept. I spent two years writing it, I wanted to give a holistic perspective on food and wine,” said Lee.

The book offers wine pairings with not simply single Asian dishes but with complete Asian meals ― the way Asians really enjoy it.

“Some come asking me to recommend a wine to pair with a single Asian dish. But who eats galbijjim (braised short ribs) without banchan (side dishes) and rice? And nobody eats kimchi alone, it’s not a salad. Of course there is a center point, I do grant that, but what is also important is the combination of other banchan,” said Lee.

She is to launch her second book titled “Mastering Wine for the Asian Palate” by spring this year. It will mainly focus on bringing a brand new lexicon consisting of names of Asian spices, ingredients and dishes to describe the taste and scent of wine.

With her writings, Lee is definitely playing a part in shedding light on the Eastern cuisine and wine market. So how big has the Asian wine market got so far? Lee’s answer was unexpected.

“It is still tiny in volume compared to what is consumed in North American and Europe, except for in the case of extremely expensive wine,” she said.

“It is because we don’t drink as much wine. In Hong Kong, a person drinks an average of six bottles of wine a year. In Japan, only two and a half. No Asian country marks above ten per year. But I think it is changing in the next generation. College kids seem to think cheap wine can also be good.”

Lee pointed out Hong Kong was able to become a leading location of wine sales not just in Asia but also in the world thanks to the government’s policies.

“Hong Kong is the only place in Asia that is eliminated of wine duty. It is also so easy to open up a company in Hong Kong. The government really encourages entrepreneurship and the infrastructure’s great as well. There have been 3,000 registered wine companies in Hong Kong, and 800 new ones opened just in 2010,” said Lee.

About the outrageously skyrocketing wine prices, though, as seen in the latest two auctions held by Sotheby’s and Acker Merrall & Condit in Hong Kong last month, Lee commented that it has been a bubble for so long.

“There are so many wealthy Chinese who are buying wine, so there is possibility for it to go up even more. Though it looks like a bubble at the moment, however, there doesn’t seem to be the possibility that it will burst any time soon,” she said.