She will succeed outgoing Constitutional Court Justice Lee Kong-hyun, who will retire from his six-year term on March 31. The nomination was made by Supreme Court Chief Justice Lee Yong-hoon. 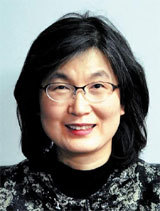 Lee Jung-mi
If she passes the confirmation hearing, the incoming justice will become the second female judge to sit on the nine-member panel, after Jeon Hyo-sook whose term ended in 2006.

Of the nine justices on the Constitutional Court, three are appointed from candidates selected by the National Assembly, three are nominated by the Chief Justice of the Supreme Court, and three by the president.

Born in Ulsan in 1962, Lee Jung-mi studied law at Korea University and began her career as a judge at the Daejeon District Court in 1987.

As an important criterion in screening candidates, the Supreme Court cited ability to consider social minorities and harmonize diverse interests.