The 560-square-meter villa is set back from the road on a gated lot. The paver-stone courtyard is punctuated by a fountain, and the custom front door, with leaded and beveled glass and side lights, opens to a two-story foyer with limestone floor, curved staircase and crystal chandelier.

There are five bedrooms and four bathrooms. The master suite has a marble fireplace with wood-carved mantel and French doors that open onto a balcony. The master bathroom features dual dressing tables, an oversized marble steam shower with etched glass and a stone fireplace. 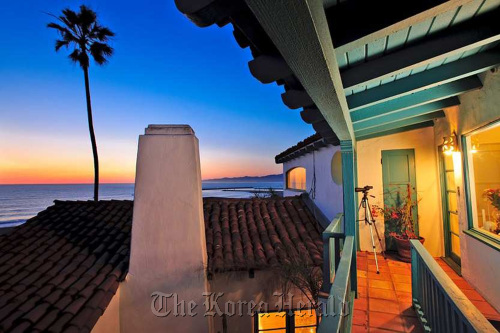 Built for Oscar-winning 1930s film star Ronald Colman, this home in the Playa del Rey neighborhood of Los Angeles, California has sold for $1.6 million. (Ron Luxemburg/Los Angeles Times/MCT)
The kitchen includes an island with a food prep sink and custom cabinetry. The home also has a wine cellar, which its new owner is just old enough to stock. It sits on landscaped grounds with a pool, spa and pool house.

The Mediterranean, constructed in 1927, sits on an ocean-view lot in a hilltop area known as Palisades del Rey. Original details include a carved beam ceiling, arched doorways and Malibu tile. Four bedrooms and three bathrooms lie within the 2,500 square feet of living space.

Lyla Oliver, a comedy and drama writer whose credits include the television shows “Judging Amy” and “Bones,” has parted with her Santa Monica, California, home for $1,902,000.

Built in 1992, the contemporary house has high ceilings, marble and hardwood floors and an elevator. Four bedrooms are on the first floor, while the second floor contains the main living space. A fifth bedroom, which could be used as an office suite, is adjacent to the three-car garage. There are six bathrooms.

Chris Ursitti, chief executive of GreenHouse Holdings, a global energy and ethanol company in San Diego, California, has listed a house he built on spec in Pacific Palisades, California, for $9,495,000.

Verandas enhance the indoor-outdoor feel of the house, which sits on nearly a half-acre of landscaped grounds with a swimming pool, spa, a rock waterfall with a grotto and dining terraces. The backyard leads to the park’s hiking trails.

Ursitti comes from a theater background and used to design sets and stages. Later he worked in the entertainment industry as a location manager.

“I try to make a house flow like a movie. The plans are my script,” he said. “I try to lay down all the components that are the drama of a house.”

Sometimes there’s even comedy. Ursitti put a 1920s phone booth from the Subway Terminal Building in Los Angeles in a previous home he built.

Beyond the double-paned windows, eco-friendly dry wall, green insulation and other sustainable materials, the home’s environmental features include an on-demand hot water system that Ursitti designed using the pipes as a reservoir.

His brother, Rick Ursitti, was project manager on the seven-bedroom, 7 1/2-bathroom house. The pair designed the residence for family living and entertaining.

The site was purchased in 2006 for $2.1 million, according to public records.

The gated Trousdale-area contemporary has four bedrooms and seven bathrooms in 560 square meters. The rebuilt and expanded 1964 house, designed and developed by Cooley real estate partner Scott Unger, sits on nearly half an acre with city views visible through walls of glass.

The property previously sold in 2007 for $3.95 million, according to public records.