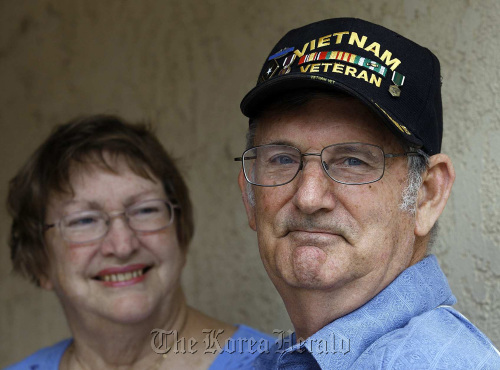 Leonard Rugh is photographed with his wife, Luanna, at Saddleback College in Mission Viejo, California, on Jan.19. (Gary Friedman/Los Angeles Times/MCT)
Against all odds, Rugh survived. But what happened after bespeaks the critical importance of the society that surrounds a survivor of penetrating brain injury.

In Rugh’s case, no one in the world beyond his hospital bed was more important than his bride of three years, Luanna Rugh, who remains, 42 years later, his chief cheerleader and primary caregiver. Outside that healing bond, however, lay a society whose attitudes about disability changed radically through the years ― in a way that has been key in supporting Rugh’s steep climb to a full and productive life.

Had either been missing, Rugh might well have lived down to the expectations his military doctors had when he returned home: Very likely, his wife was told, Rugh would remain mute, immobile and possibly incapable of purposeful thought.

“I was prepared for the worst,” she says, recalling the moment she first saw her husband, with a massive dent in his head, in a Camp Pendleton hospital ward six weeks after his injury. Still, as she stood at his bedside, he opened his eyes and fixed her with a stare of recognition.

“Hello, kid,” he gurgled with difficulty, using his pet name for her.

From that point on, Luanna Rugh ― the shy half of the couple who tended to follow the lead of her strapping, self-confident husband ― stepped into the lead role. Leonard came home after 26 months in a Veterans Administration hospital, deaf in his left ear, largely paralyzed on his left side and still slow to retrieve his words. He had grown up in a world intolerant of physical incapacity and thought himself unfit to go out in public.

“I remember the odd looks my grandmother would get when we took her out in a wheelchair, and I didn’t want that to happen to me,” he says. “I became a wallflower. ... What changed is my wife said this is not the way we’re going to live our life.”

With the birth of the couple’s daughter in 1973, Luanna Rugh decided the baby was a perfect foil for getting her husband up and out of the house. She pressed him to come for walks using a long leg brace and a cane so he could get around under his own power. He met the neighbors, began reconnecting with old friends.

In 1974, Rugh was checking the mail and lingered over a pamphlet for Saddleback College near the couple’s home in Laguna Woods, Calif. Maybe, he said, he should take a class. Luanna Rugh pounced on the opening. 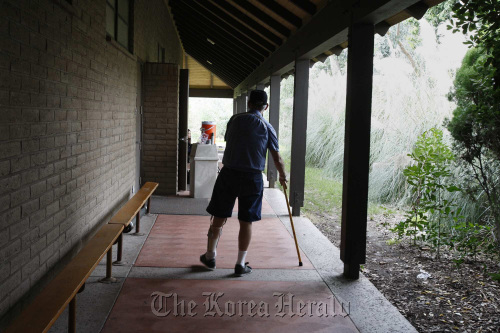 Leonard Rugh heads to the gym at Saddleback College in Mission Viejo, California, on Jan. 19. (Gary Friedman/Los Angeles Times/MCT)
“I loaded the baby into her car seat right then and there, and we went up and signed him up,” Luanna says. She would sign up at Saddleback several years later to earn a credential to teach.

Changes were abroad in the land too. In 1975, the landmark Individuals With Disabilities Education Act (IDEA) was signed into law, ensuring accommodation and access to public education for people with intellectual disabilities, mobility impairments and other special needs. Attitudes toward disability were changing, and Leonard Rugh found teachers and administrators eager to ensure his progress.

It took nine years and a waiver exempting him from a mathematics requirement ― a mental challenge his brain injury made impossible ― but in 1983, he walked across the stage at Cal State Fullerton, still using his long leg brace, to receive a college diploma. The next year, his wife gained her certificate to become a special ed teacher.

With help from friends, Leonard Rugh went on to write his own story. In a college writing class for students with brain injuries, he found the words slow to come and knew his grammar and punctuation were rough. A writers group formed by the couple’s church welcomed him in and encouraged him not to stop. For 17 years, Rugh worked on a draft of his book ― first alone and then with the help of his wife, his letters from Vietnam and the recollections of battle buddies who sought him out years after the conflict ended. The book, “Promises Kept: How One Couple’s Love Survived Vietnam,” was published in 2009.

In busy or unfamiliar settings, Luanna Rugh still makes sure to explain to her husband what’s going on ― an accommodation to his preference to stick to a calm, simple routine and his failing ability to hear in his right ear as well. She picks things up off the floor knowing he may overlook them and stumble. She knows that when he gets excited or emotional, the words won’t come easily.

He has never regained the knack for planning or spontaneous romantic gestures that he had shown before he went off to Vietnam. But he takes a bus almost daily to an exercise class that keeps him limber. He’ll chat comfortably even with strangers, and takes pride in his independence and accomplishments.

“The social milieu beyond the hospital is really, really important in promoting recovery,” says Jordan Grafman, director of research on brain injury at the Kessler Foundation in West Orange, New Jersey. “Even with retraining and hospitals, even with family support, in the end, society needs to welcome these people back in some capacity so they can contribute and function.”

In recent weeks, Rugh has watched the coverage of Rep. Gabrielle Giffords’ recovery. He is a hopeful man, but his experience has made him a hard-bitten realist. He worries that her supporters are being set up for disappointment.

“I watch the TV and I think, you’re talking a long time here, people, for her to recover. It’s not going to be a couple weeks or months. Recovery is going to be slow and hard.