The government and oil refiners are at loggerheads over how to stabilize fuel prices as the nation is fighting an uphill battle to curb inflation driven by international commodities prices.

Oil companies have been the key target of the government’s campaign against inflation since early January.

Officials have been calling on them to cut prices while regulators are conducting sweeping probes into possible price collusion.

The companies resisted the pressure, claiming the real culprit is fuel taxes. 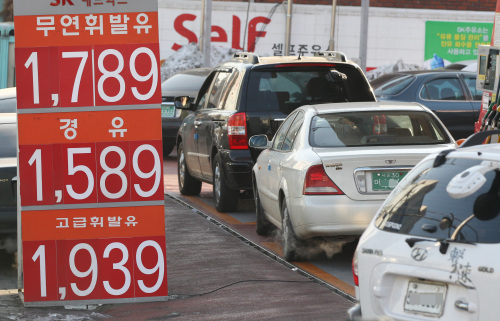 Lee stressed the importance of stable oil prices which affect a wide range of consumer prices.

Last week, the Ministry of Knowledge Economy also launched a taskforce to look into petroleum prices together with the Finance Ministry, the FTC and private experts.

“The government will look into the price structure of oil products as well as their distribution margins,” he told reporters.

Despite the government’s pressure, however, refiners seem to be wary of reducing margins they deem unrealistic and ineffective.

The government should cut fuel taxes instead of forcing refiners to lower prices, industry insiders and watchers argue.

“It is realistically difficult for refiners to cut oil prices given their small profit margins. Lowering their margins will not significantly bring down retail prices,” an industry official said.

“I don’t think it’s appropriate for the industry to discuss reduction of fuel tax or oil prices especially at this point,” said another industry official who requested anonymity. He added that they are not planning to cut the price of petroleum products.

In addition, refiners have little influence in controlling prices at privately-owned gas stations. Currently there are more of them nationwide than those directly managed by refiners, they noted.

Fuel taxes currently account for around half of oil prices, according to the industry. It currently stands at 529 won per liter.

The government has lowered the petroleum tax by 82 won per liter during the 2008 financial crisis. The tax cut was only temporary and is not in place now.

The government is expected to collect over 12 trillion won from such taxes in 2011, according to the National Assembly Budget Office.

Experts say that what fuel taxes are used for does not justify their existence. There have been continuous calls for the government to abolish them.

Fuel taxes, which comprise of those on energy, environment and transportation, are mostly being used for construction and maintenance of roads and railways throughout the nation.

The government initially lowered the budget allocation on roads this year to 7.2 trillion won, saying that the country will stop building roads which contribute to more carbon emissions and harm the environment.

Yet the amount was increased by 26 billion won after a screening by the National Assembly. This time, the government attributed such a decision to the conditions of roads in the country not meeting the standards of the Organization of Economic Co-operation and Development.

Industry watchers say that such an increase came from a power struggle in political circles where lawmakers strive to secure support in their constituencies ahead of next year’s elections.

Meanwhile, the average price of the product was 1,834 won Sunday, according to Korea National Oil Corp. The benchmark Dubai Crude Oil marked $93.44 per barrel as of Friday.