This time, the scale is much larger and the media more complex.

Under the title “Project Obangsaek,” Lee will combine the synergy of theater, cinema and the Web to generate debates, controversy and conversations about Korean culture among the global audience.

“I grew up in the United States always trying to get access to content of Korea but I never had it except for occasional North Korea thing or the Korean War. Now I’m a filmmaker making content and it’s still hard to get access to Korea,” the 42-year-old said in an interview with The Korea Herald in Seoul.

“I want to make content about contemporary Korean culture for a global audience.” 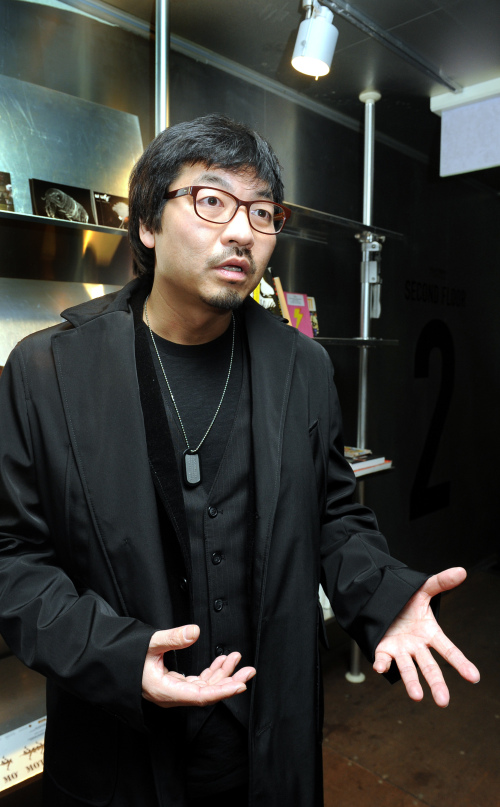 Filmmaker Benson Lee speaks during an interview with The Korea Herald in Seoul. (Park Hyun-koo/The Korea Herald)
Born in 1969 in Toronto, Lee was raised until nine in Canada and moved to the United States with his parents and lived with them until college. Later on, he traveled around the world including New York, Hawaii, Paris and London and became an independent filmmaker.

Although he didn’t go to a film school, Lee’s first film “Miss Monday,” which he shot in London, was accepted to the Dramatic Competition of the Sundance Film Festival in 1998 and the film won an award for best actor, he said. He was the first Korean-American to be selected for the Sundance competition.

“After that, it took me a while to make another movie because I was very young at Sundance, probably one of the youngest filmmakers. I had to grow and catch up,” Lee said.

One of Lee’s passions was to make a documentary about something he really cared about.

Lee remembered being amazed by break dancers in his high school days in the 1980s and came to know about Korean B-boy culture in the early 2000s.

The documentary “Planet B Boy,” premiered in 2008 in the United States, became so popular on the back of YouTube video clips that Sony Pictures decided to make it a $35 million 3-D film which Lee will direct in 2012.

“Each color has so much value and meaning. Color is part of culture. I felt we should have something that has deeper meaning that represents Korea,” Lee said.

The theater show is going to be a 90-minute non-verbal performance employing the latest 3-D technology, contemporary dance, costume, music and media technology to tell a story of Korea in the past, present and future.

Lee hopes to premier the theater show for the World Expo in Yeosu, which will be held between May and August in 2012, and take it to a global audience.

“My main goal is to take to as many continents as possible. Theater is a different kind of medium (from cinema) that you can keep traveling and playing,” the filmmaker said.

The Obangsaek documentary is a behind-the-scenes look into the creative process in the making of the theater show which includes a series of interviews with celebrities, artists, politicians, chefs and fashion designers. The interviewees he met include “Nanta” producer Song Seung-hwan who took the show to Broadway, fashion designer Lee Sang-bong and U.S. Ambassador to Korea Kathleen Stephens.

Regarding utilizing social media to promote Korea, Lee criticized the government’s approach of only saying “good” things about Korean culture.

“Social media is all about having conversation and telling stories.”

He took an example of a recent article by the Guardian titled, “What’s the point of kimchi?”

Although the writer said she didn’t like kimchi, the story created so much debate about kimchi and the controversy she created was a much better tool for promoting Korean food than the Korean government, he said.