That was the assessment Wednesday of Fed policymakers as they ended their first meeting of the year. The Fed made no changes to the program, and the decision was unanimous.

The conclusion came from a new lineup of voting members that includes two officials who have raised questions about the bond program. They worry that the purchases could eventually ignite inflation or speculative buying in assets like stocks.

The bond-buying program is intended to lower rates on loans and lift stock prices, spurring more spending and invigorating the economy. Chairman Ben Bernanke faces the challenge of trying to increase hiring and growth without creating new economic threats. 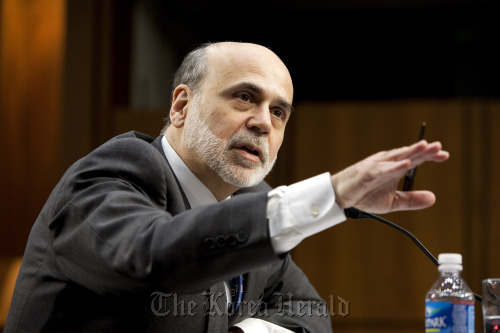 Ben S. Bernanke, chairman of the U.S. Federal Reserve, testifies at a Senate Budget Committee hearing in Washington, D.C. (Bloomberg)
The tax-cut package that took effect this month is easing pressure on the Fed to stimulate growth through the bond purchases. The measure renewed income-tax cuts and cut workers’ Social Security taxes, boosting their take-home pay.

The Fed’s assessment of the economy was nearly identical to its statement at its last meeting in December. The policymakers seemed to downplay recent improvements in the economy, including stronger spending by consumers and more production at factories.

Instead, the Fed noted that the economy still faces risks. The biggest: that high unemployment will damp consumer spending, which accounts for 70 percent of national economic activity.

Fed policymakers observed that the “economic recovery is continuing, though at a rate that has been insufficient to bring about a significant improvement in labor market conditions.”

One of the Fed’s main reasons for launching the bond-buying program was to lower high unemployment, now at 9.4 percent.

The Fed noted a recent increase in the prices of commodities, such as oil and gasoline, but said it isn’t likely to spark high inflation. The prospect that inflation will remain tame gives the Fed leeway to stick with its program, announced Nov. 3, to buy $600 billion worth of Treasury debt by the end of June.

On Wall Street, stocks were little changed after the Fed statement.

The Fed kept its pledge to hold a key interest rate at a record low near zero for an “extended period.” The Fed has kept rates at ultra-low levels since December 2008 to try to encourage people and businesses to spend more.

In crafting its message on the economy, the Fed avoided sounding too optimistic, which might have led investors to think it would cut short its bond-buying program. But it didn’t send a downbeat message, either.

“The Fed can’t take anything granted at this point,” said economist Brian Bethune at IHS Global Insight. “The economy has shown signs of strength before and then it fizzled.”

The Fed’s show of unity Wednesday could erode by spring. At its next meeting March 15 or the following one on April 26-27, the Fed will probably want to signal whether it will end the bond-purchase program on schedule or extend it. Any push to renew the program would likely face stiffer resistance.

Fed policymakers said Wednesday they’ll continue to monitor the bond-buying program. They have left open the option of buying more bonds if the economy weakens, or less if it strengthens.

Plosser and Fisher have reputations as inflation “hawks” ― more concerned about the threat of high prices than about the need to stimulate the economy. They are among four regional Fed presidents who are voting members this year on the Fed’s main policymaking group, the Federal Open Market Committee.

Fed watchers think Kocherlakota, a first-time voting member, will lean toward hawkishness on inflation. Evans’ reputation puts him among the “doves” ― those concerned more about strengthening the economy than about warding off inflation.

In mid-February, the 11 members of the Federal Open Market Committee will issue updated economic forecasts for this year. Growth is expected to strengthen. Unemployment is likely to stay high, around 9 percent.