[ The Korea Herald – Send E-mail ]
Obama’s State of Union speech to push for faster economic recovery, jobs
By 민동현
Published : Jan 25, 2011 - 18:36
Updated : Jan 25, 2011 - 18:36
WASHINGTON (AP) ― Political engines are revving up for the 2012 presidential election and the sound of one of those, President Barack Obama’s, will be heard above all others Tuesday night in his nationally televised State of the Union speech to a joint session of Congress.

The Obama message: his prescription for a more robust economic recovery that cuts persistently high unemployment, now at 9.4 percent.

Obama’s prospects for winning a second term probably depend largely on a robust upswing, a return to substantial growth and better employment prospects that finally seal off the worst economic downturn since the 1930s Great Depression.

The president will step to the rostrum with polls showing his overall approval rating at 53 percent, 6 points higher than after the November congressional election ― a drubbing for Democrats and loss of their majority in the House of Representatives. 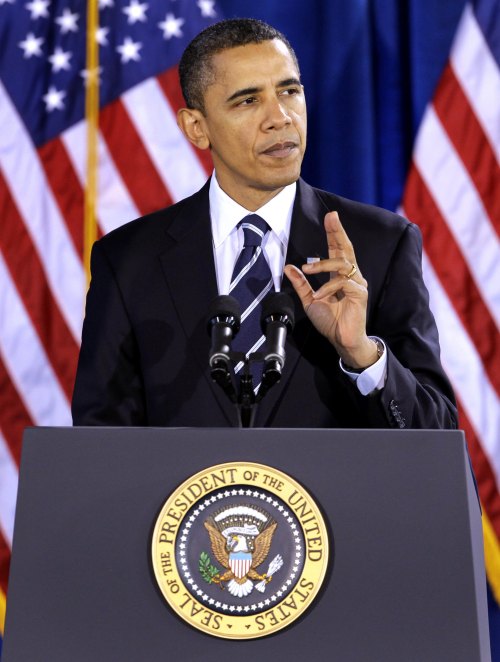 U.S. President Barack Obama speaks about the key to boosting American competitiveness at Forsyth Technical Community College in Winston-Salem, North Carolina, Dec. 6. (AP-Yonhap News)
The uptick in Obama’s standing coincides with his decision ― post election ― to negotiate with Republicans on a tax package and to build bridges to the business community.

Obama is also being helped by a stronger economy. A new survey from the National Association for Business Economics was more positive than at any time since the start of the Great Recession.

The survey released Monday showed that all major industry groups were seeing more demand for their products and services ― a precursor to job growth.

Obama’s mission in the State of the Union address is to build on those improved numbers by proving to ordinary Americans, especially independent voters, and his fellow politicians that he has a hard and fast plan for creating jobs and spurring the economy. Otherwise he is in danger of handing Republicans ammunition for their already-potent rhetorical weaponry.

The party’s success in November was largely built on a message that Obama was a big-spending, deficit-expanding socialist, determined to extend federal government control over the lives of voters. Republicans have taken particular aim at the administration’s health care reform, already voting in the first session in the House to repeal the measure. That will die or be killed in the Senate where Democrats still hold the majority. Obama has promised to veto any such legislation should it reach his desk.

Another Republican message ― the huge government debt threatens the future of the country ― also resonates with voters. Yet, cuts in any or all federal programs ― especially among the elderly who benefit from Medicare health insurance and Social Security pension payments ― are a political mine field that politicians would rather not, and perhaps won’t, enter with the next election so near.

That will not, however, mean an end to political posturing.

While Obama told supporters in a video released Saturday that he will focus on economic issues, particularly jobs, he also spoke of investing in educating workers and in research and technology. That set off alarms among Republicans.

“Any time they want to spend, they call it investment, so I think you will hear the president talk about investing a lot Tuesday night,” said Senate Minority Leader Mitch McConnell. “We’ll take a look at his recommendations. We always do. But this is not a time to be looking at pumping up government spending in very many areas.”

“We want America to be competitive, but then he talks about investing,” Cantor said. “When we hear ‘invest’ from anyone in Washington, to me that means more spending. ... The investment needs to occur in the private sector.”

One huge place to find savings is in the $700 billion the U.S. spends for its military. Both parties suggest a willingness to have a look at cuts there, but neither side has laid out a framework for serious cutbacks.

That is difficult in a country still conducting two wars, the one being wound down in Iraq and the ongoing and brutal fighting in Afghanistan. Those conflicts ― while opposed by some members of the Republican’s tea party wing and leftist Democrats ― likely will not find much space in Obama’s speech. There are two reasons: Obama knows he has no opportunity to gain support among tea partners; and left-wing Democrats likely will vote his re-election in 2012 regardless.

Thus, with the economy and unemployment still the first worry for Americans, Obama has been blitzing the business community, setting a significantly warmer tone and shaking up his staff with the addition of centrist advisers. His Tuesday night address will fit snugly with those atmospheric and personnel shifts as Obama pivots from the solidly left-leaning legislative agenda of his first two years, to a more centrist and pliable economic boosterism and readiness to compromise with the opposition.