From next year, the company hopes to raise the overseas figure by 20,000, pushing up the overall sales figure to 240,000 units.

For Kia, the Morning has played an important role in its recent growth spurt, which has seen the carmaker’s domestic market share rising above 30 percent in 2010, for the first time since 1995.

With more than 101,000 units sold on the local market last year, the Morning is Kia’s bestselling vehicle, accounting for more than a third of the company’s passenger car sales. 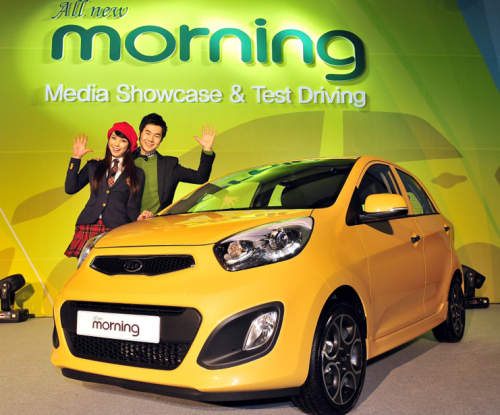 The vehicle’s performance figures put it ahead of the competition at a glance.

In addition, the vehicle comes with a range of features new to the segment, including some specialized for female drivers, who make up a large number of Morning buyers. According to the company, 61 percent of city car drivers and 41 percent of those purchasing them are female.

Morning’s features new to the segment include a vehicle stability management system, button ignition and DMB navigation system with voice-recognition, and six airbags as standard.

Features designed to appeal to female motorists include grip-type handles to minimize damages to fingernails ― a complaint common among female drivers ― and a storage compartment under the front passenger seat, said Kim Boo-sik of Kia’s domestic product team.

“Our strategy is to dominate the city car market with performance and safety that goes beyond the limits of city cars,” Suh Choon-kwan, head of the company’s domestic marketing group, said. He added that the company will be operating joint marketing schemes with other brands that have a significant female customer base.

While the vehicle may offer features new to its segment, its price goes beyond the traditional boundaries of the segment, which has long been considered the most economical with high fuel economy and low prices.

With prices for a model with minimum features starting at 8.8 million won ($7,800) and going up to 11.05 million won, the Morning is significantly more expensive than similarly equipped versions of its rival Matiz Creative.

In addition, the top trim model fitted with all possible options comes in at 14.95 million won, which falls less than 500,000 won short of the price of the most expensive trim of Hyundai Motor Co.’s subcompact car Accent.

The company, however, insists that the new Morning’s pricing is highly reasonable considering the range of new features added to the city car.

According to Suh only about 1 percent of city car buyers choose all the options.

“We expected the trim level priced at 11.3 million won to be the most popular, but about 41 percent of the pre-launch orders received for the vehicle are the trim priced at 12.3 million won,” Suh said.

“This shows that consumers want luxuriousness and safety despite being city cars. And despite the Morning’s specifications being superior to the Matiz, we tried to keep the price increase to the minimum.”

As for the sales target of 100,000 units, Suh said that the figure has been set at a relatively conservative level in light of the scheduled launch of a crossover utility vehicle with a 1-liter engine later in the year, and the size of the country’s city car market.

“This year, the demand for city cars is expected to be around 160,000 units. And we expect that we will take up 70 to 80 percent of the market including the new CUV,” Suh said.

“Taking into account Korea’s consumer pattern (of preferring larger cars), the market expansion is not occurring without limits.”