Developers of Tokyo’s Sky Tree broadcast tower, set to be the world’s highest when it is finished next year, are doing what long seemed unthinkable, shutting the door on the tattooed tough guys of the Japanese underworld.

Their bold stance comes amid a police offensive against crime groups since 2009 that has also emboldened local governments and citizens’ groups to voice their opposition to mobsters long deemed untouchables. 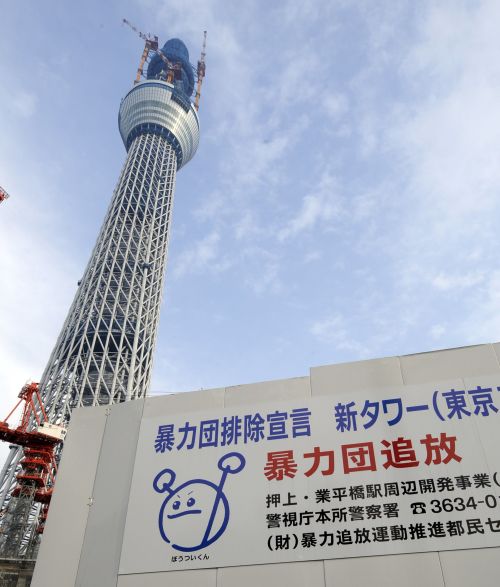 A sign saying “Gangsters not welcome” displayed at the gate of the construction site of Tokyo’s Sky Tree telecom tower on Dec. 7. (AFP-Yonhap News)
A force of 140 police officers joined the pre-dawn raid to net Takayama, who allegedly led the Kodokai faction of the largest yakuza group, the 50,000-member Yamaguchi-gumi.

Takayama ― whose one eye is permanently shut, reportedly from a sword fighting injury ― was said to be the Yamaguchi-gumi’s de facto leader after its boss, Kenichi Shinoda, 68, was jailed in 2005 for gun law violations.

In December, police struck again and arrested the Yamaguchi-gumi’s alleged number-three, Tadashi Irie, 65, on suspicion of paying the relatives of a hit man who is in jail for a gangland killing.

Like crime groups elsewhere, yakuza have made money off illegal gambling, drugs, prostitution, protection rackets and loan sharking, as well as white-collar crime and through front companies.

But unlike Chinese triads or the Italian mafia, yakuza groups are not secret societies and operate openly out of corporate headquarters that have signs at their front doors and are listed in phone books.

Fanzines, movies, manga comics and videogames have long celebrated the exploits of the crime families that have a near-monopoly on extrajudicial violence in a society famous for its very low crime rates.

One in 10 people under age 40 consider the yakuza “a necessary evil,” according to a recent local survey by the Nara prefecture police department.

After the 1995 earthquake in Kobe, the yakuza there earned kudos with the shell-shocked public by being first to open soup kitchens, beating bungling government authorities in a time of desperate need.

The yakuza, who call themselves “chivalrous organizations” claiming a samurai code of honor, have long and famously had links with conservative politicians and the massive construction sector, a major cash-cow.

Upon joining gangs, members sever their family ties and pledge total loyalty to their crime family ― and, in case of transgressions, famously atone for them by cutting off a little finger and handing it to their boss.

Police have tended to leave them alone, grateful they kept down street crime, as long as they adhered to rules such as not harming civilians and occasionally having a member confess and do jail time, experts say.

That consensus was broken by the 4,000-member Kodokai, says Jake Adelstein, an expert on the Japanese underworld and author of “Tokyo Vice,” a book about his decade as a police reporter for a major Japanese daily.

“The yakuza have always been supposed to stay in the shadows and to some extent the police were willing to tolerate their existence,” said Adelstein.

The Kodokai have however been more violent, have harassed and threatened police officers and their families, refused cooperation with police and almost never confessed to any charges, Adelstein said.

“They have a reputation for taking out civilians as well,” he said.

“That’s a violation of the unwritten rules of how the police and the yakuza are supposed to get along.”

Police were angered when the group’s gangsters showed up in force at a major sumo tournament in Nagoya last year, knowing that public TV broadcasts would be beamed into prisons where their jailed bosses could watch them.

Officers raided a series of sumo stables for their alleged yakuza links and widespread involvement in illegal gambling rackets run by the gangsters, a scandal that rocked the ancient national sport.

The Tokyo Metropolitan Police were aware of ties between the sumo world and the Yamaguchi-gumi as early as 2008 but only under the leadership of Tokuharu Ando were they able to get the go-ahead to pursue the case.

Adelstein said police chief Ando “is the Elliot Ness that Japanese have been waiting for. He has tremendous courage and political savvy.” Ness was a legendary U.S. law enforcement officer who targeted crime families in the 1930s.

Laws have also been passed against the yakuza, who have long been aided by Japan’s lack of witness protection schemes and the practice of plea bargaining that would give gangsters incentive to inform on each other.

The tide has been turning since a revised anti-gang law was passed in 2008.

Across Japan, prefecture by prefecture, ordinances are being passed by local governments that criminalize paying off the yakuza or providing them with funds, on a corporate and individual level.

Companies that continue to pay organized crime risk having their executives arrested and their names publicly released by the police.

New rules in national laws hold gang bosses responsible for crimes committed by their foot soldiers, and business contracts now routinely include clauses in which parties pledge they are not members of “anti-social or violent groups.”

Encouraged by the police and government lead, citizen groups have rallied to oppose plans by yakuza factions to shift their corporate offices into their neighborhoods, which drives down property prices.

At least six Japanese prefectures have approved ordinances that ban yakuza leaders from setting up offices or buying homes in residential areas and near schools, Kyodo News has reported.

“It is very important for our entire society to beleaguer the crime organizations,” Toshihiko Yamada, inspector at the organized crime elimination division of the Tokyo Metropolitan Police Department, said.

The construction sector has also taken a stance against the yakuza, which has long been involved in supplying labor, strike-breaking or sending hired muscle to residents who refuse to make way for new developments.

At the Tokyo Sky Tree, set to soar 634 meters by 2012 to become the world’s tallest communications tower, a warning sign shows a manga character with raised fists, announcing that the yakuza are banned from the project.

“I think times have changed. It’s time to say ‘no’ firmly,” said Hirokazu Sato, a senior official with the Kabuki-za theatre development project team in Tokyo’s upmarket Ginza district, which has also taken a no-yakuza stance.

“The Kabuki Theatre is drawing a lot of attention. It would be a serious problem if we had ties with them (the yakuza). We have introduced thorough measures not to damage our brand image,” he said.

Toru Hironaka, a lawyer and advisor to an anti-yakuza committee of construction firms, said the push is part of a wider trend.

“Authorities are seriously cracking down on the yakuza,” he said. “Now, companies that have relations with yakuza can neither receive bank loans nor be listed. Social pressure on yakuza has been growing.”

In many ways, the yakuza ― who had their heyday in the ‘bubble era’ of the 1980s ― are suffering from the same problems as the rest of the country, said Minoru Yokoyama, law professor at Tokyo’s Kokugakuin University.