The donation ceremony took place at the Indonesian education ministry in Jakarta. Lee Joong-keun, the founder and chairman of the group, National Education Minister of Indonesia Muhammad Nuh, South Korean Ambassador to Indonesia Kim Ho-young and about 400 teachers and students attended the event.

The digital pianos have been pre-recorded with Indonesian adaptations of several popular Korean songs such as Arirang and Spring in Hometown, and the Indonesian national anthem. 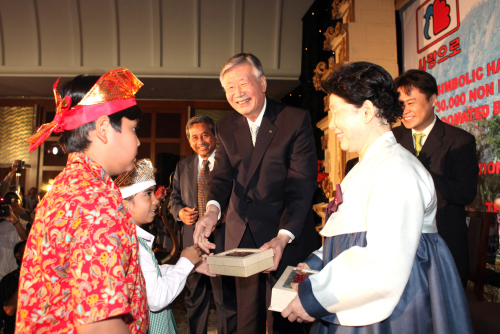 Booyoung Group founder and chairman Lee Joong-keun (center) gives souvenirs to an Indonesian student at the Indonesian education ministry after donating 10,000 digital pianos and 30,000 blackboards in Jakarta, Thursday. (Yonhap News)
Booyoung officials said the Korean songs were adapted and pre-recorded on the pianos in an effort to help foster exchanges between the two countries.

“I wish the donation will add momentum to the promotion of friendship between Korea and Indonesia,” Lee said. “I will try to extend assistance to the Philippines, Myanmar, Brunei, Bangladesh and Papua New Guinea.”