Korea is sending 150 athletes and officials to the games, vowing to accomplish a back-to-back third place finish at the seventh Winter Asiad.

Four years ago at Asia’s biggest winter extravaganza in Changchun, China, Korea came in third place behind China and Japan.

This year, Korea is sending 106 athletes in five disciplines, including its traditional gold mines speed skating and short-track speed skating.

While the host Kazakhstan is expected to dominate the games, Korea is aiming to win 10 gold medals to fend off strong challenge of its archrival Japan, according to Kim Jong-wook, head of South Korean delegation. 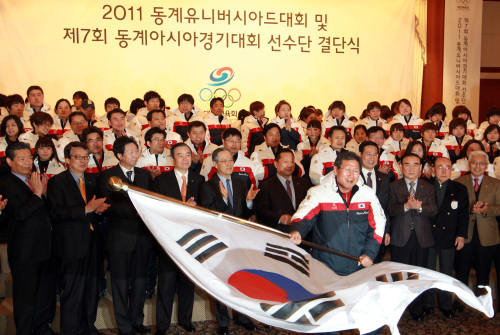 Kim Jong-wook, head of Korean sports delegation for Asian Winter Games, waves the national flag during the contingent’s inauguration ceremony on Friday at the Olympic Parktel, Seoul. (Yonhap-News)
In the previous event in China, Korea won seven gold medals from the skating events. This time Korea hopes to repeat that feat in Kazakhstan, and it also expects to win gold medals in ski-jumping and curling.

“Our athletes are ready to compete in the games. I believe we can achieve best-ever result in Kazakhstan,” said Kim at the team’s launching ceremony in Seoul.

“Last year, during the Vancouver Olympics, we successfully established ourselves as a winter sports powerhouse. Now, we’ll prove that Korea is Asia’s leading country in winter sports,” he added.

Speaking at the ceremony, Park Sun-kyu, vice minister of culture, sports and tourism, said that the Asian Winter Games would be crucial for Korea’s bid to host the 2018 Winter Olympics.

“PyeongChang is bidding for the Winter Games. I hope the athletes try their best not only to win medals, but also to help herald PyeongChang’s mission to the world,” Park said.

Speed skater Lee Seung-hoon, who won a gold medal in the men’s 10,000 m in the 2010 Winter Olympics, said he hopes to repeat his achievement.

Lee Sang-hwa, the women’s 500 m winner in Vancouver, said that the Asiad was a battle against herself, adding that she has gained more confidence from the Winter Olympics.

“I feel less pressure than during the Olympics. I feel good about this competition,” Lee said.

Vancouver Olympic figure skating champion Kim Yu-na will not compete at the Asiad. Instead, 17-year-old Kwak Min-jeong will represent Korea in Kazakhstan.

“This is my first Asian Games, so I don’t expect very much of this competition, but I’ll try my best to finish within the top five,” Kwak said.

On Friday, national sports delegations also held a special ceremony for the Winter Universiade. Korea is sending 125 athletes and officials for the Universiade, which is slated for Jan. 27-Feb. 6 in Erzurum, Turkey.

The national sports delegation for the 2011 Universiade departs from Seoul on Jan. 24 while the Winter Asian Games squad heads for Kazakhstan on Jan. 27.