The No. 1-ranked Nadal went straight to the practice courts and worked on his serve, later saying it needs work to improve his chances of winning the Australian title.

The 24-year-old Spaniard led 6-0, 5-0 when Marcos Daniel retired with a left knee injury on Tuesday.

He sympathized with Daniel, recalling he’d had to retire from the last Australian Open with an injured knee in a quarterfinal loss to Andy Murray. But Nadal recovered quickly and won the next three majors and is now aiming to be the first man since Rod Laver in 1969 to hold all four Grand Slam trophies at the same time.

“It’s a terrible feeling, for sure. I wish him all the best for a fast recovery,” Nadal said after the match. “Last year was a really difficult time when I played this tournament. I came back here playing well ... but to go out like that was hard mentally. 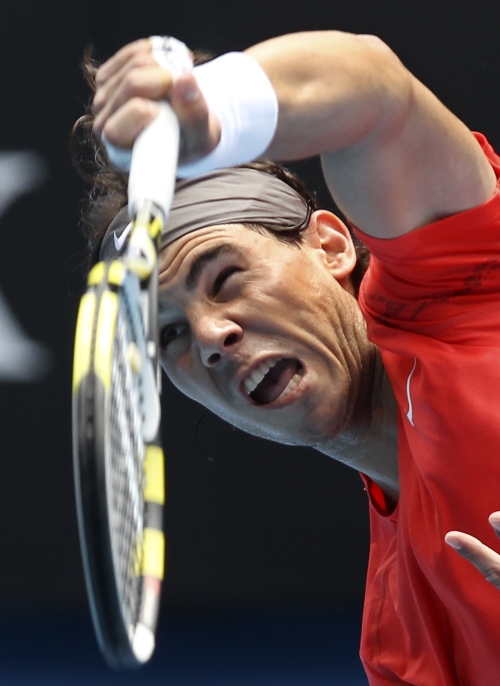 Rafael Nadal serves against Marcos Daniel at the Australian Open. (AP-Yonhap News)
“Finally, I had a very good season in 2010.”

Good season is the understatement of the tournament. Nadal won the French Open, then Wimbledon and finally claimed his first U.S. Open title. With Tuesday’s victory, he’s now on a roll of 22 consecutive match wins in Grand Slam tournaments.

“I came back after a difficult situation. Winning Roland Garros was very important, it allowed me to play the rest of the season with a little bit more calm.”

Still, he’s not thinking about victory celebrations at Melbourne Park just yet.

“I never think about winning the four Grand Slams in a row because that’s very far right now,” he said.

Daniel had a medical time out at the end of the first set and had his left knee heavily strapped. He said he’d injured his knee earlier in the week in practice, but thought it would get him through the match.

He said playing Nadal on center court made it more difficult.

“That’s the hardest part. In the beginning I was feeling embarrassed a little bit,” he said. “I tried to play the game, it didn’t work. It looks like I’m 75 years old.”

When the Brazilian had a break point in the second game of the second set, he raised both arms and received a rousing cheer from the crowd. When Nadal had a rare miss with a wild overhead that sailed over the baseline to give the Brazilian a second breakpoint chance, the crowd went while again.

Nadal finally held after the game went to deuce five times and it progressively seemed only a matter of time before Daniel would retire as he limped around.

“Save energy or not, I think the way that the match came doesn’t make big difference,” Nadal said. “Is difficult to say I played really well, I played bad. I think I played right.”

Australian wild-card entry Bernard Tomic advanced to the second round with a 6-3, 6-2, 7-6 (5) win over Jeremy Chardy of France. He is a potential third-round opponent for Nadal.

Hoping a third time will be luckier, Vera Zvonareva began her bid to reach a third consecutive Grand Slam final with a commanding 6-2, 6-1 win over Sybille Bammer in the opening match Tuesday on Rod Laver Arena.

Zvonareva, who lost to Serena Williams in the Wimbledon final and to Kim Clijsters in the U.S. Open final last year, dominated the first set against the 30-year-old Bammer and tightened her grip on the match in the second. She conceded only four points in the first four games of the second set and didn’t allow the Austrian to hold until the sixth game.

“It’s tough to play your best tennis in the first match. The most important thing is I’ve done what I needed to do and moved through to the next one,” Zvonareva said.

Nadal’s easy run to the second round came the day after his chief rivals Roger Federer and Novak Djokovic got their campaigns started with straight-sets wins.

Defending champion Federer dismantled Lukas Lacko 6-1, 6-1, 6-3 and Djokovic soundly beat Marcus Granollers 6-1, 6-3, 6-1. Eighth-seeded American Andy Roddick had a 6-1, 6-2, 6-2 win over Jan Hajek, while his U.S. Davis Cup teammates had a tougher time, with Mardy Fish coming back from two sets down to win in five for the first time in his career and Sam Querrey losing in a five-setter.