Atletico were ahead after just seven minutes at the Santiago Bernabeu when Uruguayan striker Diego Forlan was on target following a bright burst from Sergio Aguero which was ended by goalkeeper Iker Casillas’ clumsy challenge.

But Sergio Ramos powered in a header from an Angel Di Maria corner in the 14th minute to bring the home side level before Cristiano Ronaldo and Mesut Ozil added second half strikes to give Real breathing space ahead of the second leg next week.

Atletico’s young goalkeeper David De Gea pulled off a string of fine first-half saves to keep his side in the contest, particularly alert to a header from Portuguese international centre-half Ricardo Carvalho.

But he was powerless to keep out Real after the break. 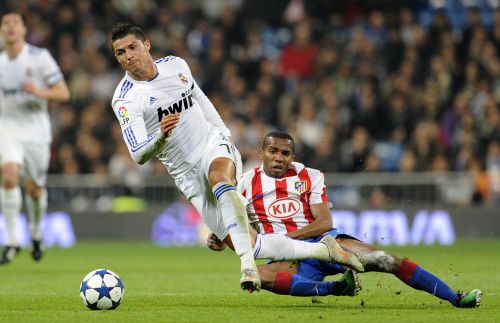 Ozil then grabbed the third in stoppage time after a defensive error allowed him to chip the ball home from close range.

There was a bad-tempered end to the match, however, when Aguero and Ramos clashed and as their row continued, missiles were thrown onto the pitch.

In the night’s other game, Almeria edged Deportivo La Coruna 1-0 thanks to a first-half own goal from on-loan Norwegian defender Knut Olav Rindaroy.

On Wednesday, Lionel Messi celebrated his second successive World Player of the Year award by hitting a hat-trick in Barcelona’s 5-0 rout of Real Betis. Pedro and Seydou Keita were Barcelona’s other scorers.

Sevilla came back from 3-1 down to draw 3-3 at Villarreal in Wednesday’s other last-eight, first-leg tie.