Clijsters struggled early in the heat before storming home in a final set tiebreaker to overcome unseeded Russian Alisa Kleybanova, 4-6, 6-3, 7-6 (7/1) in 2hr 39min.

The Belgian third seed will now take on Li, who earlier wore down Serbian qualifier Bojana Jovanovski 7-6 (7/5), 6-3 in 1hr 40min.

Clijsters, 27, who won here in 2003 and 2007, will be bidding for her 41st career singles title in Friday’s final, while Li is after her fourth WTA title.

Clijsters jumped to a 3-0 lead early in the second set, but despite losing her service in the seventh game, she broke again to level the match. 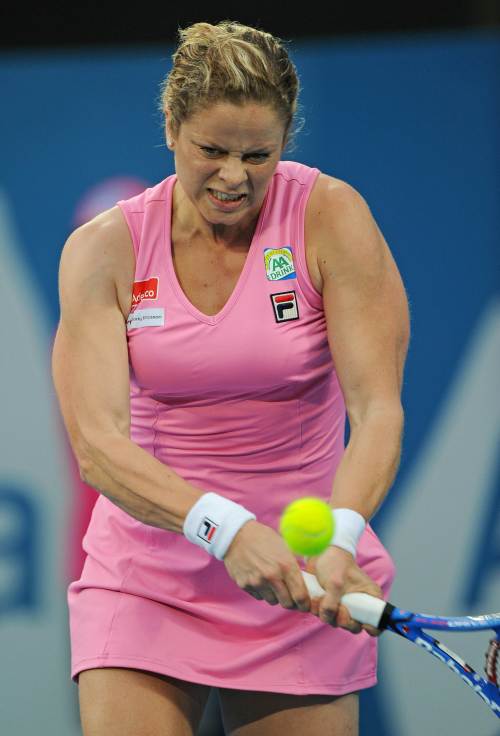 Kim Clijsters of Belgium hits a backhand return to Victoria Azarenka of Belarus during their quarter-final match at the Sydney International tennis tournament Thursday. (AFP-Yonhap News)
Kleybanova, who needed two medical timeouts for back and foot troubles, kept the pressure on Clijsters and they traded two service breaks before the Belgian kicked away in the decisive tiebreaker.

Li, 28, who will be defending her rankings points from last year’s semi-final appearance at next week’s Australian Open, was looking forward to her showdown with the world number three.

“I have nothing to lose because I have played her also many times,” said Li, who trails 1-4 in their meetings.

“She’s a great player, so I just have to show my best tennis on the court.”

The Chinese number one trailed in her match after a service break in the third game.

But she traded four service breaks with Jovanovski before breaking the Serb’s serve again in the 12th game to force a tiebreaker.

She won the tiebreaker 7-5 to take the set and controlled the last set with three more service breaks to wrap up victory.

“At the beginning of the match I didn’t know how she played because I have never seen her practice or play a match.

“Yeah, I was lucky I can finally win the match.”

Li is in winning form ahead of the season’s opening Grand Slam tournament in Melbourne after eliminating two-time major champion Svetlana Kuznetsova of Russia in the quarter-finals, and Australian Anastasia Rodionova and French qualifier Virginie Razzano in the earlier rounds.

Li became the first Chinese player to break into the world top 10 rankings after reaching the semi-finals of last year’s Australian Open.

She is making her fourth appearance at the Sydney International and reached the 2007 semi-finals in which she lost to Clijsters in three sets.

“I always do well in Australia. I don’t know why. Maybe because of my winter training back home. So maybe I should move here,” she laughed.