Fellow Slovenian Rok Zima, who claimed second place at the first round Wednesday, finished just 9 points behind the winner after nailing 134 and 128.5 meters Thursday.

Another Slovenian Robert Hrgota was third with 240.4 points. He jumped 127.5 meters at the K-125 slope in his first attempt and cleared 130.5 meters to stand at the podium.

“I’m really happy. This is my first best record at the international level,” Pungertar said after winning the title. The 20-year-old Slovenian also won the first round of the two-day event Wednesday.

PyeongChang hosted, for the first time, the two-day ski jumping event at the Alpensia ski-jumping stadium, which was completed in 2009. For the third time, the Gangwon Province city is bidding to host the Winter Olympics.

Thirty-nine jumpers from 10 countries were invited to the country’s first-ever international ski jumping competition, which was aimed at grabbing world wide attention for its Olympic bid.

Sitting at the top notch stadium, looking down on the snow-covered jump slopes and watching jumpers flying through air, one might feel privileged. But the 16,000-seat stadium was almost empty. Only a handful of local spectators turned up Thursday.

“This is the first time I’ve seen ski jumping. I didn’t know it was such an exciting game,” said Lee Jun-gi, an office worker from Gangwon Province.

“But it would have been better if there were more spectators,” he added.

Five Korean jumpers competed to win their first title on home turf. But, rather disappointingly they failed to make it even into the top five of the competition.

Choi Yong-jik jumped 119.5 and 124 meters to finish in 14th place with 210.8 points, while Choi Heung-Chul and Kim Hyun-ki came in 23rd and 24th respectively. And the rest of team failed to qualify for the second jump. 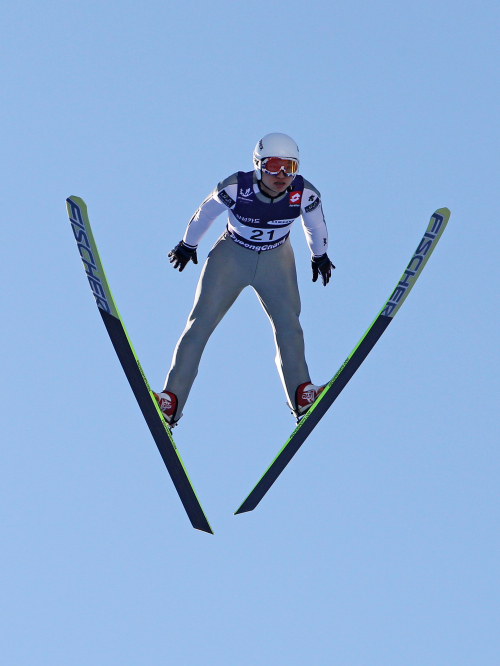 Korean national team ski jumper Choi Heung-chul takes off from the Alpensia K-125 slope during the FIS Continental Cup ski jumping competition Thursday in PyeongChang,  Gangwon Province. (Yonhap News)
The manager admitted his team’s failure was due to their lack of practice, with the main reason being that they could not find a place to train.

Although PyeongChang has two international-standard jump slopes at the Alpensia Resort, the national teams are limited in their use of the facilities due to the cost of maintenance, Kim said.

Kim and his national squad are now aiming for the 7th Asian Winter Games, which is slated for Jan. 30 to Feb. 6 in Kazakhstan.

“We need to start training for the Asian Games. But at the moment, we are not allowed to practice at the Alpensia Resort.”

“We are in talks with the resort, and hopefully we can use the slop. But, if we can’t, well, we have to go to Europe for training,” he added.