South Korea is coming off a solid 2-1 win over Bahrain on Tuesday to start its Asian Cup football tournament in Qatar, but the real test is set for Friday.

At 10:15 p.m. Friday, Korean time, South Koreans will face Australia, the highest-ranked team at this year’s Asian Cup at No. 26 in the world.

This is Australia’s second Asian Cup appearance since the country entered the auspices of the Asian Football Confederation, the football governing body of the continent. Despite having 15 World Cup members at the 2007 Asian Cup, Australia was eliminated in the quarterfinals.

This year, armed with stars from the top-tier leagues in England, Turkey, Russia, Japan and even South Korea, Australia is considered a strong title contender. It got off to a rousing start to the tournament with a 4-0 rout of India Monday.

South Korea’s Koo Ja-cheol scored both goals in the win over Bahrain, and others such as Ji Dong-won, Lee Chung-yong and Park Ji-sung had a number of chances. Lee Young-pyo and Cha Du-ri rattled Bahrain’s defense on both wings with speed and guile. 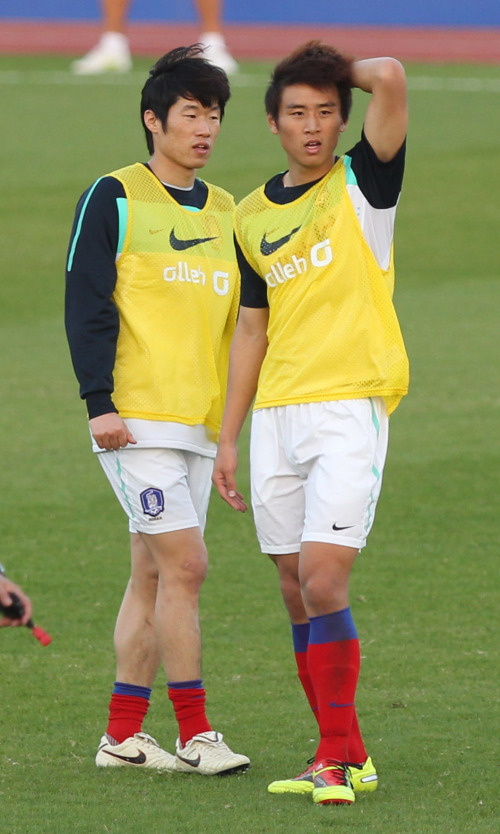 Park Ji-sung (left) and Koo Ja-cheol take part in a training session ahead of the Australia match. (Yonhap News)
The Australian backline features a familiar name for South Korean fans. Sasa Ognenovski, the reigning AFC Player of the Year, is a defensive stalwart for Seongnam Ilhwa Chunma in South Korea’s top-division K-League.

Ognenovski, who is affectionately called by his first name in South Korea, helped Seongnam win the 2010 AFC Champions League, the premier club competition in the continent. He scored the opening goal in Seongnam’s 3-1 win over Zob Ahan of Iran in the final and was named the man of the match and also the most valuable player of the tournament.

Lucas Neill is another well-known figure among European football aficionados. The Australian captain enjoyed a 15-year stint in England before switching over to Galatasaray in Turkey last year.

Mark Schwarzer, the last line of defense in net, is the starting goalkeeper for Fulham in the English Premier League. The 38-year-old leads the current Australian roster with 83 international matches under his belt.

Up front, Australia will likely cause more trouble for South Korea than Bahrain did.

Tim Cahill, goal-scoring midfielder for Everton in the English Premier League, has 24 goals in 48 international games for his country. He found the net twice against India earlier this week.

Fellow midfielder Harry Kewell was another goal scorer against India. The former Liverpool regular in England now plies his trade for Galatasaray in Turkey.

A 26-year-old midfielder Brett Holman is emerging as the go-to-guy up front. He scored twice for Australia during the group stage at the 2010 FIFA World Cup in South Africa, and opened his Asian Cup run with a goal against India.

South Korean head coach Cho Kwang-rae said Australia will be tougher than Bahrain but is not unbeatable.

“Australia is a different team than Bahrain,” Cho told reporters in Doha after running his team through a practice. “But Australia isn’t that strong defensively. If we mount quick attacks, it will work against them.”

On defense, South Korea will have to try to stop Cahill and Co. without Kwak Tae-hwi. The 185-centimeter-tall defender was sent off late in the second half against Bahrain after getting tangled up with an opposing forward inside the box and will miss the Australian contest.

His defensive side kick, Lee Jung-soo, received a yellow card for delay of game, and another yellow against Australia would make him ineligible for the following match against India next week.

In Kwak’s place, Cho Yong-hyung, who played alongside Lee in all four South Korean games at the World Cup in South Africa, is most likely to get the nod. Two other defenders, Hong Jeong-ho and Hwang Jae-won, have combined for just seven international matches.

Whoever takes Kwak’s place will have an important role, coach Cho said.

“Australians like to move diagonally and send in sharp crosses from both wings,” he said. “We’ve prepared our central defense to handle those crosses.”

Midfielder Ki Sung-yueng predicted a difficult match, saying, “We have to be strong mentally and physically.

“We did a great job against Bahrain, but Australia is clearly a better team and the players are physical,” he said. “If we don’t lose one-on-one battles, we should have a good result.”