The catalogues, titled “The Royal Seals of Joseon,” are published in tabloid size and have 2,204 pages in total. They have over 13,800 photographs.

The first book introduces different kinds of eobo while the second book features cases, locks and keys that secured the eobo. The final volume features 1,824 relics, including eobo case wrappers and ornaments. 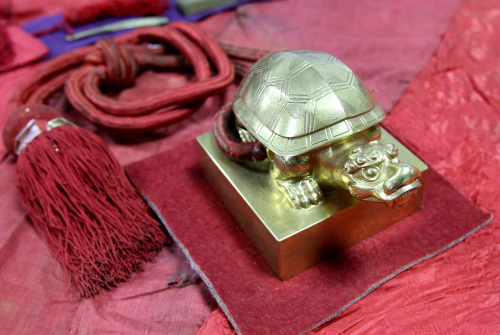 Royal seal of King Jeongjo (Yonhap News)
“It is an unprecedented case in the world that eobo, which is the zenith of Joseon Dynasty’s royal craftsmanship and the ultimate version of its royal protocol, was produced for over 500 years. With the publication of the catalogue, we are seeking to list eobo as a cultural heritage and as a Unesco World Cultural Heritage as well,” said Jeong Kye-ok, director of the collection management department at the National Palace Museum of Korea.

Eobo were a symbol of power, as they were used in various royal ceremonies. Among the eobo featured in the catalogue, 34 belonged to kings and 48 were owned by queens.

“All of the relics mentioned in the catalogue will serve as precious materials to further studies about fabrics, furniture, metal crafts and dying-out techniques of the Joseon Dynasty,” said Jeong.