[ The Korea Herald – Send E-mail ]
Book of condolences opened for Czech hero
By 김경호
Published : Jan 11, 2011 - 18:38
Updated : Jan 11, 2011 - 18:38
The Czech Republic Embassy in Korea has set up a book of condolences in memory of former Czechoslovak Foreign Minister Jiri Dienstbier, who was a key player behind the establishment of diplomatic relations between Czechoslovakia and South Korea.

Dienstbier was the first post-communist and democratic minister of foreign affairs of Czechoslovakia as well as the leading personality of the Czechoslovak human rights movement during the communist rule. 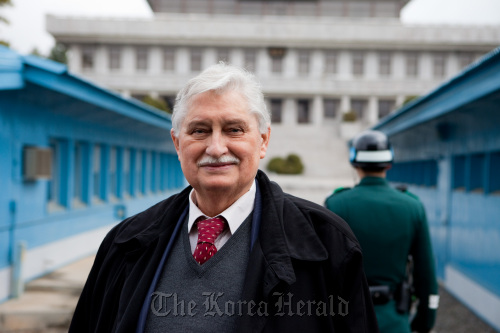 Jiri Dienstbier
The embassy of the Czech Republic said the book of condolences in memory of Dienstbier will be opened at the chancery at 1-121 Sinmnno 2-ga, Jongno-gu, Seoul today from 10 a.m. to noon and from 1-6 p.m. and Thursday from 1 p.m. to 6 p.m.

Dienstbier died after a long illness in a Prague hospital on Saturday, he was 73.

In March 2010, Dienstbier visited South Korea on the 20th anniversary of the establishment of diplomatic relations between both countries.