Expats often complain about the lack of bands that tour Korea, but one Californian has stepped up to change that.

The Korean scene has often largely been limited to huge imports but little else. When smaller bands do come the price is usually inflated ― Kings of Convenience last year cost 77,000-88,000 won.

Sean Maylone saw this as an opportunity. He started Supercolorsuper, an event promoter that puts on mini tours of Korea for indie artists and sells tickets at an affordable price.

Recent shows include Das Racist, Four Tet and the Handsome Furs, while Coco Rosie are due to play Jan. 22 and Liars on Feb. 11-12.

“It’s all the stuff that wasn’t coming here but people had heard of,” Maloney says.

“We do do some obscure things but some of the bands we put on are like major indie ― the Rolling Stones of indie ― you don’t have to reach to know it.” 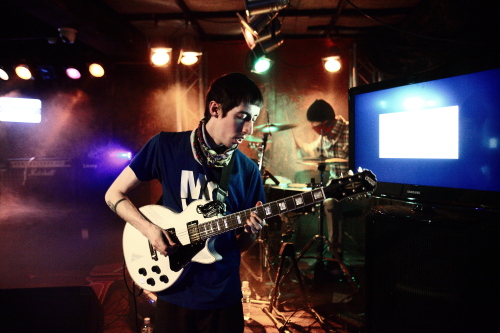 “It was half identifying a need but it was a need I had too, if I was going to live in Korea,” he says. “I had been complaining that there wasn’t this thing, and then I just built it, instead of complaining constantly.”

The mystery is why someone hasn’t already done this. The reaction of people in the industry to his plans was less antipathy and more a sense that it wasn’t possible to put on such shows in Korea.

“There was a lack of belief that it could work in the Korean scene,” he says. “People thought that if it didn’t exist then it shouldn’t exist.”

Having friends in China and Japan who had been doing the same thing, Maloney did not share their skepticism. He reasoned if 800 people could pay $5 in China and support a tour, then 100 people in Korea could make a show work ― and it didn’t need to cost the earth.

For Maylone, it was a matter of economic common sense that Korean music fans were getting a bad deal.

“In China the currency is so weak there. A band that has to take home U.S. dollars, they can charge $5 or $6 and still make it worth their while to play in China,” he explains. “That’s kind of a bad sign because in Korea people can drop $400 for a phone and $100 for a really bad concert.”

That overcharging is something Maylone obviously objects to. All of their shows have had ticket prices under 60,000 won and most are below 40,000 won.

He says he wants to protect his investors, but won’t gouge for tickets or charge $12 a beer in the venue. At the same time, he’s wary of bigger shows and venues, with the extra business complications, sponsorship and increase in staff required.

“We’re doing this so that Koreans on a limited income can see multiple shows a month, rather than breaking the bank for $120,” he says. “But sometimes I wish that I had brought a band just so I could have done it cheaper.”

The group also puts on shows featuring local artists, but there is always a twist.

The Round Robin shows take place on several stages with the audience at the center. Bands play individual songs one by one, rather than each playing a full set in turn. The acts are all set up at the same time, so there is no need to have a long break between them.

The Super Sketch show was a combination of music and live drawing, shadow puppetry and other visual art.

Bands play in the crowd while above them screens show the art as it is being made.

“We had an overload of all the best local visual artists,” Maylone explains.

“The Round Robin is really successful at getting people excited about the same bands that play every week in Hongdae. We’d like to do the same for visual artists.”

Maylone is protective of the Supercolorsuper brand ― he says he will not put on a local show unless it has the production caliber of Round Robin or Super Sketch ― but it does not come with an air of exclusivity.

Instead he seems a little confused as to why nobody else is doing the same thing. He hopes Supercolorsuper encourages other promoters to drop their prices.

There are other things he’d like to change. He sees the way bands are presented as very staid.

“You could watch an artsy post-punk hardcore band and no matter how loud it is it would be like watching a poetry reading: People should be seated, thinking about it,” he says.

“In California we just have a party around something intellectual.”

There is also a tendency in Korea to keep concerts limited to weekends.

“I would like to break that. If you do Green Day on a Tuesday people will come out,” he says. “But at the same time it’s so risky to bring in a band that you think will break through. You pay $40,000 and hope that it’s a big enough act that people will just go anyway. It’s such a gamble.”

Maylone is a man with more ideas than it appears possible to carry out, but he seems aware of that. He’s cautious not to be overconfident when explaining them ― he mentions everything from starting his own label to buying land ― and is quick to point out that he has Korean partners and relies on people to help him.

In the nearer future he plans to hold a panoramic video show and extend the tour circuit to include Wednesday nights in Gwangju. There is a Round Robin in Busan on Jan. 29 and in Seoul on Feb. 26. For more details visit supercolorsuper.com.