MEXICO CITY - Drug-related violence over the weekend claimed 51 lives across Mexico, including a record-setting 15 decapitations in the beach resort of Acapulco, authorities reported Sunday.

The beheadings, mutilations, drive-by shootings and summary executions were carried out in southeastern Guerrero and northern Chihuahua states, as well as in the Mexican capital, despite the government's five-year, 50,000-troop crackdown on organized crime. 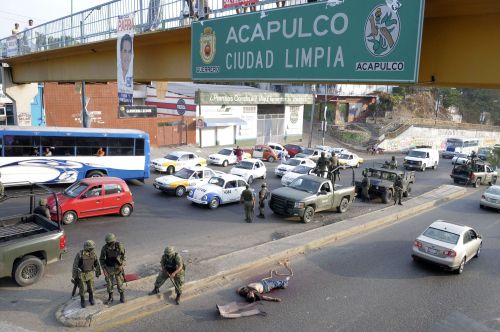 The body of a man that was hanging from a pedestrian bridge prior to the rope slipping loose is guarded by Mexican soldiers in Acapulco, Mexico, Sunday Jan. 9, 2011. Four men were found at the site, two of them decapitated and dismembered. Several separate violent incidents over the weekend in this Pacific resort city have dozens dead. Street sign on bridge reads, "Acapulco Clean City." (AP-Yonhap News)

By far the grisliest scene unfolded Saturday at an Acapulco shopping center where the decapitated bodies of 15 men were found on the sidewalk, with their severed heads bunched nearby. Two of the victims were 17 years old, a Guerrero official said.

It was the worst mass decapitation since August 2008, when 12 headless bodies were found in eastern Yucatan state capital Merida, in a crime attributed to the notorious Los Zetas drug cartel.

Another six murder victims were found Saturday in Acapulco stuffed inside a taxi near a supermarket, and four other men were murdered in two separate incidents in the city, Guerrero state police said.

On Sunday, Acapulco officials said police found three more bodies, including one that was decapitated and mutilated, on the side of a road near the city. Media reports said the victims were among 10 people kidnapped late Saturday from a local discotheque.

In Mexico's most violent state of Chihuahua that borders the United States, authorities reported 17 people murdered over the weekend, 14 of them in Ciudad Juarez -- across from El Paso, Texas -- which has the highest murder rate in the country.

In Mexico City, four young men were killed in a drive by shooting late Saturday outside a grocery store, city officials said.

The latest killings bore the hallmarks of the vicious gangland slayings that have terrorized large areas of Mexico as drug cartels battle it out among themselves and with security forces.

More than 30,000 people have been killed since 2006 when the government of President Felipe Calderon launched a major military crackdown against the drug gangs. Last year alone, a record 12,000 murders were blamed on the drug violence.