Asia needs only 2 1/2 points from the eight singles matches on Sunday to win at the Black Mountain Golf Club. 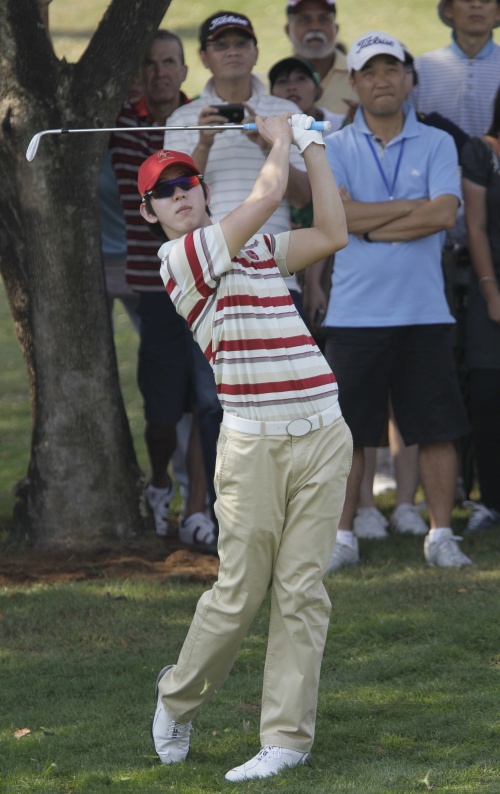 The Thai-Japanese team of Thongchai Jaidee and Yuta Ikeda beat Peter Hanson and Frederik Andersson Hed of Sweden in the day’s final game, leading by three strokes with one hole to play.

Ikeda, who won four Japan Tour titles in 2010, hit four birdies in the first nine holes and also had birdies on Nos. 10 and 11.

“We have good teamwork,” Sonoda said. “If I missed, he (Ishikawa) didn’t, and when he missed, I didn’t.”

Jeev Milkha Singh recovered from a back injury for a 1-up win with new partner Kim Kyung-tae of South Korea over Swedish pair Henrik Stenson and Johan Edfors in the only match that went to the last hole.

Robert Garrigus recovered from an atrocious start Saturday by holing a 50-foot eagle putt on the 18th hole to join Steve Stricker and Jonathan Byrd in the lead at the Tournament of Champions.

In the notorious Kona wind ― the toughest at Kapalua ― Garrigus chunked a 4-iron into a hazard to open with double bogey and followed with a bogey to quickly fall out of the lead. By the end of the third round, he was back where he started.

The eagle gave Garrigus a 4-under 69 and gave him a good chance to become the first player since Tiger Woods in 2000 to win the season opener after winning the final event of the previous year.

Stricker turned an impossible lie into an unlikely birdie on the 12th hole, avoiding a loose piece of grass behind his ball in the bunker by hitting a 4-iron to 5 feet.

It was part of a five straight birdies that carried him to an 8-under 65, a score he didn’t think was possible in wind that makes the Plantation Course play at its longest.

Byrd, who has been around the lead all week, was steady as usual.