Bernanke told the Senate Budget Committee that there’s rising evidence that a “self-sustaining” recovery is taking hold. He said he expects stronger growth because consumers and businesses will boost spending this year.

Bernanke spoke an hour after the government released a disappointing employment report. Employers added only 103,000 jobs in December. The unemployment rate fell to 9.4 percent partly because people gave up looking for jobs. Many economists had forecast much bigger job gains and were looking for a signal that businesses were stepping up hiring.

Asked about December’s 103,000 job gains, Bernanke said if the pace of hiring doesn’t increase, “we’re not going to see sustained declines in the unemployment rate.”

The Fed chief defended the central bank’s move to buy $600 billion in Treasurys through June and gave no hint that it would change its course. The bond purchases are designed to boost the economy by lowering interest rates, encouraging spending and lifting stock prices. 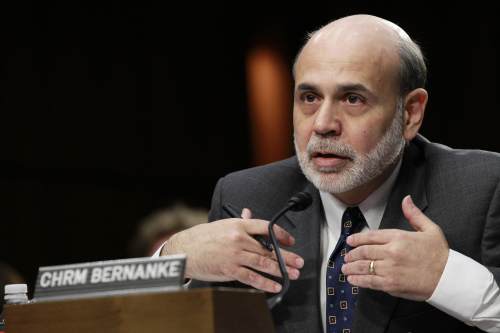 Federal Reserve Board Chairman Ben Bernanke testifies on Capitol Hill in Washington Friday before the Senate Budget Committee. (AP-Yonhap News)
The program has been criticized by Republicans in Congress and some Fed officials who contend it will do little to help the economy and could hurt it by unleashing inflation and speculative buying on Wall Street. China, Germany and Brazil complained it was really a scheme to push down the value of the dollar, giving U.S. exporters a competitive edge.

The Fed chief said the threat of deflation ― a dangerous drop in prices, wages and in the values of homes and stocks ― and the potential for persistently high unemployment were sufficient reasons to launch the program.

Bernanke predicted that the overall pace of the economy will be “moderately stronger” this year. He said the Fed has seen “increased evidence that a self-sustaining recovery” is taking place.

Factories are cranking up production. The service sector is growing at its fastest pace in more than four years. Fewer people applied for unemployment benefits over the past month than in any other four-week period in more than two years.

Consumers are spending more freely, and a payroll tax cut is likely to boost their activity further. Tax cuts are also likely to lead businesses to expand and hire more.

But weakness in job growth could slow this momentum, Bernanke cautioned, especially if consumers spend less.

Bernanke said unemployment is likely to be around 8 percent two years from now.

Other threats to the economic outlook, Bernanke said, are:

A depressed housing market, where growth in foreclosures could push down home prices even more.

Bernanke also argued for Congress and the White House to come up with a long-term plan to reduce the government’s trillion-plus-dollar budget deficits. However, he warned them not to slash spending or boost taxes now because the economy is too fragile.

President Barack Obama’s debt commission at the end of last year failed to reach a consensus on a deficit-reduction plan. Over the coming decade, government deficits are estimated in the $10 trillion range. If Congress fails to come up with a reduction plan, the economy could be hurt, Bernanke said. Big deficits could force investors to demand more returns on government loans and interest rates could soar.

Sen. Jeff Sessions of Alabama, the highest ranking Republican on the committee and a fiscal conservative, expressed concern that the Fed’s bond-buying program could spur inflation. And he wondered whether the Fed was simply printing money to cover the nation’s deficits.