It was Oscar night 2001 and Inarritu had just been overlooked by the academy ― for the first time. The then-38-year-old filmmaker celebrated the defeat of his “Amores Perros” by drinking copious amounts of tequila with Sean Penn and Bardem, two men who would later serve as unlikely muses for the Mexican director.

He and Bardem subsequently began writing “love letters” back and forth, expressing their desire to collaborate. But Inarritu ended up working with Penn first ― on 2003’s “21 Grams.” It wasn’t until many years later that Inarritu would call Bardem with a project designed specifically for the Spanish actor.

That tailored cloth is “Biutiful,” a poignant, unrelentingly serious drama that Inarritu spent four years researching, writing, directing and editing. Bardem plays Uxbal, a complex, middle-aged Spanish street hustler who both exploits and cares for recent Chinese and African immigrants in Barcelona. When he learns he’s about to die, he must make amends, both as a father and in his professional life.

The film debuted at the Cannes film festival this year and won Bardem an actor’s award. It received a Golden Globe nomination for best foreign film. At a recent screening moderated by Penn, the actor compared Bardem’s performance to Marlon Brando’s Oscar-nominated turn in “Last Tango in Paris.”

The kudos are particularly gratifying for Bardem and Inarritu considering that the filming experience was painful for both as they worked in incredibly cramped, smelly quarters in Barcelona, re-creating the dismal, often hopeless world in which the immigrants live.

“It was really difficult, more difficult than ‘Babel,’” said Inarritu, who shot “Biutiful” in 2008 in chronological order as is typical for him. “It was emotionally draining. The shooting was really tense. And working with non-actors, or those acting for the first time, was challenging.” 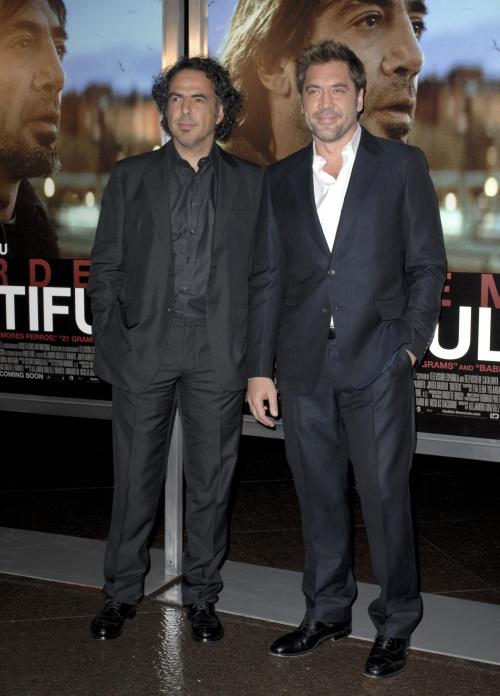 Alejandro Gonzalez Inarritu, left, and Javier Bardem arrive for the premiere of “Biutiful” at the DGA Theater in Los Angeles on Dec. 14. (Apega/Abaca Press/MCT)
For Bardem, “Biutiful” marks a bit of a return to the darker material for which he is best known. The actor, who began performing in Spain as a child, crossed over as an international star with his intense performance as persecuted Cuban writer Reinaldo Arenas in 2000’s “Before Night Falls.”

He won a best supporting actor Oscar for his chill-inducing role as Anton Chigurh in 2007’s “No Country for Old Men” but spent most of the last few years dabbling in lighter fare such as Woody Allen’s “Vicky Cristina Barcelona” and this summer’s “Eat Pray Love.”

Bardem was willing to go down “Biutiful’s” rabbit hole with his friend, an acting experience he says was unlike any other he’s had, because he connected to the character immediately. “There was something there that I understood emotionally, intellectually,” said Bardem. “I wanted to take that risk, to see if I could rob those moments that don’t belong to me, that you hope will never belong to you.”

Inarritu’s year of research on “Biutiful” involved interviewing more than 100 recent Chinese immigrants to Spain, many of whom appear in the film. He was threatened by members of the Chinese mafia after they learned he was making a film about their world. He accompanied Spanish police on two raids of crime rings that were trafficking Chinese workers into sweatshops hidden around Barcelona.

But the darkest point in Inarritu’s journey into this netherworld was dealing with Diaryatou Daff, a first-time actress from Senegal who beat out a thousand other women for the key role of Ige, who comes to Uxbal’s side at his darkest moments. Daff is a recent immigrant herself, and her real-life obligation to support family members back home parallels Ige’s obligations onscreen. According to Inarritu, Daff experienced some personal problems during the filming and took a severely dark turn.

“She went into a deep depression, closed herself in a room and tried to kill herself,” Inarritu recalled. “She was out of control. She hasn’t seen her kid in three years. She sends money home, maintaining 33 people by herself. So I was dealing with a real person, who was dealing with the same pain as the character, with no acting skills.”

All the while, Bardem was morphing into Uxbal, a man who journeys into the final moments of his life. Already injured in real life with a sore back, Bardem transformed physically into this character during the five long months of shooting. His chest inverted, his shoulders sloped, he spoke barely above a whisper, all in the name of Uxbal.

“In this case, I had so many ideas about how to put that man on the street and how to make him talk and walk and behave,” said Bardem. “But I came to a moment where I realized that those behaviors can’t be created from the outside. I wanted to focus on what is really the inside journey of this guy.”

Inarritu was already immersed in Uxbal’s world, a world that in many ways came from the director’s own personal demons. “All the themes that are explored here are mine. Family diseases, emotional diseases, even fears,” said the director, scarfing down a Caesar salad at a Beverly Hills hotel. “I have big offers to do Hollywood films, but when I’m doing this, I know that I have to do it. This comes from a deep, deep part of me. I have never done a job for a job, but this one I think was really close to me.”

For one, Inarritu wanted to confront one of humanity’s greatest fears. “When we were kids we were scared of ghosts or dragons. Adults’ dragon is death. And I like the fact of somebody facing the ... dragon in his life and this shows how to deal with that.”

More specifically, Inarritu was returning to a theme that has haunted him since childhood.

“As a kid one of my biggest fears was my father dying,” says Inarritu. “I remember I would hear my father breathing when he was snorkeling and the thought of my father dying was my scariest thing.”

The director’s father is currently fighting cancer, and that battle helped shape the character of Uxbal in the director’s mind. It’s also why Inarritu dedicated “Biutiful” to his dad.

“Biutiful” marks Inarritu’s first movie without screenwriting partner Guillermo Arriaga (“21 Grams,” “Babel”). Reaction to the more than $20-million movie has been mixed, with foreign critics seemingly more responsive to the film’s dark subject matter than their American counterparts. Roadside Attractions is distributing the movie and is looking for some Oscar attention to lift its box-office performance.

Having endured the grueling production, Inarritu and Bardem now face a different challenge: convincing audiences to turn up. Inarritu said he knows this movie is not for the masses, but he believes those who do take a chance on it will be surprised by its impact.

“This is not a hamburger,” said Inarritu. “This does not have to be liked by everybody. But the quality of the conversation I have had with the people who see it is just at another level.”

“This is the best you can get,” he said. “Because you see the people’s faces, you see how they have been affected by it. They are not the same person after leaving the theater, in a better way. That’s what a real feel-good movie will give you. It’s about the strength and beauty of the human soul that’s expressed in such a way that I haven’t seen in other movies.”