Prince Ali garnered 25 votes while Chung received 20 votes from the 45-member AFC executive committee to oust the honorary president of the Korea Football Association from the FIFA seat that he has kept for the past 16 years.

The defeat means Chung is now out of the 24-member FIFA executive committee. Chung first became FIFA vice president in 1994, and won his fourth term in 2007 unopposed. But this time, he faced a strong challenge from Prince Ali. 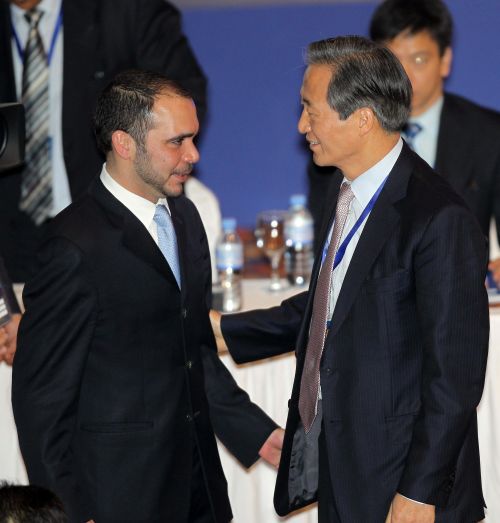 Chung Mong-joon (right) congratulates Jordan's Prince Ali bin al-Hussein after losing his FIFA title Thursday. AFP-Yonhapnews
The 35-year-old Jordanian royal, who chairs the Asian Football Federation, appealed for full Arab support to dethrone Chung. He is also believed to be backed by FIFA president Sepp Blatter, who is scheduled to stand for re-election in June.

Chung and Mohammed Bin Hammam of Qatar, the re-elected president of the AFC, were seen as strong candidates to end the 74-year-old Swiss chief’s regime. Blatter attended the Asian conference to build support for his own campaign for a fourth four-year term in office, and witnessed his rival’s defeat.

The result came just one month after the FIFA chose Qatar for the 2022 World Cup, underlining power shift in the world’s football governing body toward the Middle East.