Samsung Electronics is scheduled to reveal its fourth quarter earnings on Friday in Korea.

“I believe we were not wrong to believe that we can hit the $400 billion sales mark by 2020,” said Choi Gee-sung, CEO and vice chairman of Samsung Electronics in a press conference in Las Vegas, where the Consumer Electronics Show is underway.

“I think we can really get there,” Choi said, predicting that Samsung will set the new technological paradigms defined by terms such as “smart,” “mobile” and “cloud.” 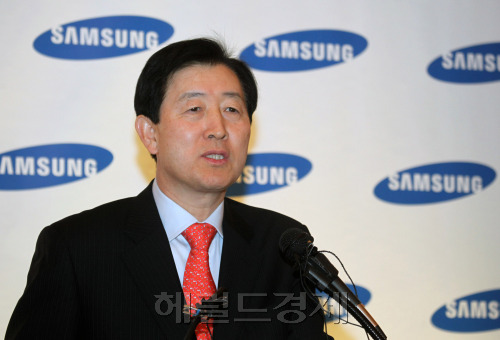 Choi Gee-sung, CEO and vice chairman of Samsung Electronics
One high-ranking Samsung official said the $200 billion target by 2015 was feasible, considering that the electronics firm is likely to record an average 10 percent growth every year.

Choi said if the company was unable to improve its core competence on its own to reach its goals, it should look overseas, as Samsung Electronics’ Chairman Lee Kun-hee recently said in his new year’s address.

“We cover a lot of ground, and that means we need more partners,” he said.

But such acquisitions will not happen in Korea, he said, noting that acquisition prices are too high.

“Not to mention that we would cause too much confusion in the local markets if we try to do M&As here,” Choi added.

The tie-ups Samsung will pursue will mostly be technological, he said.

The company, amid warnings from the chairman that it would face severe adversity soon if it does not prepare for the future, has been branching out into new industries, such as health and bio-technology.

After a slow start, it has recently recaptured success in the world of smart devices with its smartphone, the Galaxy S and the Galaxy Tab, its tablet PC. 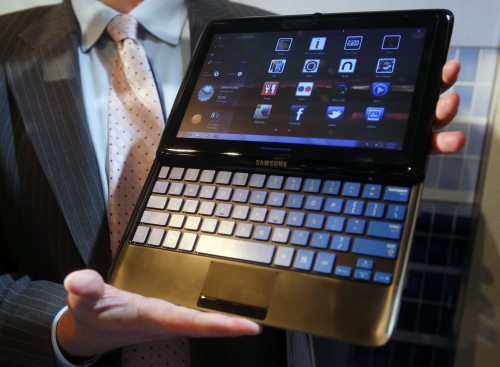 On Wednesday, Samsung introduced a number of new smart and television lineups, such as its super-slim 4G smartphone and its Slide PC 7 Series, which is a combination of a tablet and a laptop.