The Seoul-based firm also said that, as of the end of last year, it has begun to sell its panels to Japan’s Sony, a signal it saw as being a prelude to many more contracts.

LG Display had not sold products to Sony for the previous seven years.

Above all, the price range is the most attractive aspect of the new technology, called “film patterned retarder,” according to Kwon Young-soo, CEO of LG Display at a press conference held on the sidelines of the Consumer Electronics Show in Las Vegas.

“Including the special 3-D glasses, FPR is the most price-competitive technology out there,” he said. 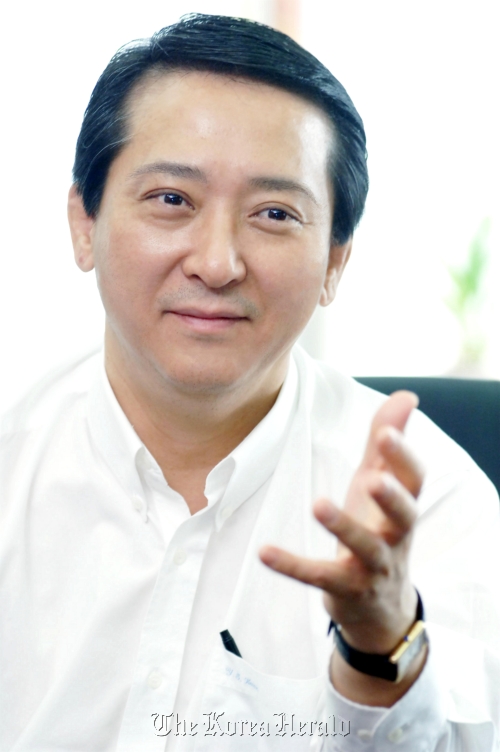 Kwon Young-soo, CEO of LG Display
This is because the new technology replaces the glass attached to LCD television with film, thereby reducing the cost to about one-quarter of the original price.

The bulky, battery-charged glasses that accompany shutter glass ― the existing 3-D technology ― accounted for a large part of the criticism thrown at 3-D technology.

The glasses made for FPR look like regular sunglasses, with curved lenses that help better protect eyesight, LG Display said.

“Whereas first generation shutter-glass technology introduced us to the possibility of 3-D TV, the next generation FPR makes 3-D practical for mainstream use,” Kwon said.

Other criticism toward shutter-glass technology included flicker ― fading of images ― and crosstalk.

These problems have also been resolved with FPR technology, Kwon said.

He predicted that LG Display’s new technology would account for more than 70 percent of the world’s 3-D LCD television market this year, which was expected to reach between 15 million and 20 million units.

Based on such market dominance, LG Display expected good performance for this year. “We have every faith in our new technology,” Kwon said.

He added that autostereoscopic technology ― 3-D without eyewear ― was still a long way off from development or becoming affordable.

FPR panels are to be released in the U.S. and Europe, respectively, in April and May. They are already being sold in China.