But in a couple of years, there might be a few more from the country.

Sung Min-kyu, a South Korean minor league coach for the Chicago Cubs, is working with seven South Korean players in the Cubs’ system. In an interview with the Yonhap news agency this week, Sung said he believed the Cubs could field some South Koreans in the majors in a few years.

“In the next two or three years, I think there will be some South Korean major leaguers,” said Sung, who is the first South Korean coach in U.S. minor league baseball and has been with the Cubs since 2008. “They may or may not be regulars, but they will make the big league team. And afterward, we could have even more.”

Major League Baseball clubs operate minor league teams across different levels. Class AAA, or Triple A, is the highest level in the minors. The rookie league is at the bottom of the ladder, a notch below Class A, or Single A. 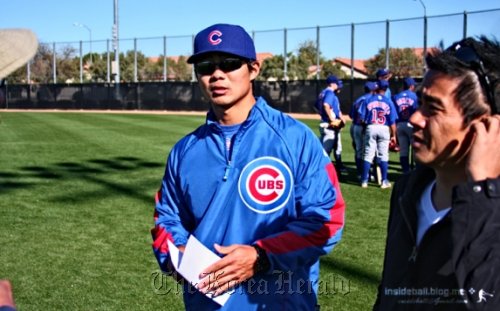 Outfielder Na Kyung-min was the lone South Korean on the Boise Hawks, a Class A club. Outfielder Kim Dong-yub was a member of the Arizona League Cubs in the rookie league. Pitcher Kim Jin-yeong spent the season in the instructional league, where youngsters hone their skills before moving up to Class A clubs.

Sung, 28, played college ball in South Korea, New Zealand and in the U.S. with the University of Nebraska at Omaha before being drafted by the Kia Tigers in the Korea Baseball Organization in 2006. He joined the Cubs in late 2007 on a minor league deal as a player but started coaching the following year.

He now has multiple responsibilities for the Cubs. He is based in Mesa, Arizona, as the hitting coach for the rookie league team.

But Sung also travels to Daytona, Peoria and Boise throughout the year to check up on the developments of South Korean players. He also spends about half a year in South Korea, attending high school or university games to scout young talent.

His job title on his business card is “international operations/player development assistant.”

Sung, who estimated that he watches between 200 and 250 baseball games a year, quipped that he has a ton of frequent flier miles along with hotel and rent-a-car membership points. But along the way, he’s also built experience that can’t be quantified.

“I’ve really learned a lot, and I am just grateful for the opportunity to do all these things,” Sung said. “Some people wonder why I have to always travel and do all the work. But I think this will be helpful for my future.”

Sung’s crisscrossing appears to have paid off. Sung said all seven minor leaguers made progress in 2010.

“Now they have to learn how to play with more consistency for a full season,” he said. “They should build on their experience (from last year) to get ready for the new season.”

Sung said Ha exceeded his preseason expectations. The 20-year-old, who converted from catcher to right fielder and then to center fielder, batted .317 with seven home runs and 46 runs batted in 77 games. He also hit for the cycle in a game in August.

“I didn’t expect him to do this well. He really made strides at the plate,” Sung said. “He used to chase breaking balls, but now he’s a great fastball hitter. His defense has also improved a lot.”

In 2011, Sung will have his eyes on Rhee, who posted a 5-13 record with a 5.25 earned run average in 26 games, 25 of them starts. The 21-year-old had a reconstructive elbow operation, commonly known as Tommy John surgery, in 2008, and last year was his first full season after going under the knife.

“The goal for him should be to finish the next season in Class AA ball,” Sung said.

All seven players joined the Cubs’ system straight out of high school over the past two to three years. Sung said it could take “three to five years” before a high school graduate can have a crack at the majors.

“Reaching the major leagues fast doesn’t guarantee that the player will stay there,” Sung said. “Choo Shin-soo spent seven years in the minors.”

Sung said all other South Korean minor leaguers should strive to keep improving “one step at a time.”

“It’s not important at which level they start the season,” the coach said. “It’s about where they are at the end of the season.” (Yonhap News)