Nearly all of them are there for the release party of Neh magazine’s November/December issue, and quite a few are staff members.

Neh’s publisher and creative director CJ Koster-Allen is all over the bar, mingling with the visitors, bringing in snacks, as well as setting up stacks of Neh’s two most recent issues for partygoers to enjoy.

When he finally gets a moment to sit down, he lights a cigarette and explains what draws him to the publishing industry. After watching him, it’s not hard to figure out.

“I actually enjoy the stress of it,” he says between drags. “There’s constant movement. There always seems to be something that needs to be done.”

Though he’s still young, it’s not exactly a new feeling for the Canadian native, who has been working in the publishing field for more than a decade, since the days of his high school newspaper.

“I also enjoy taking ownership of the design,” he says. “Design is the beating heart of any good publication.”

The “heart” reference is not the last figure of speech Koster-Allen will use to make Neh sound like a living thing. Occasionally he sounds as though Neh is his child, one he remains proud of even though it has grown up into something he never expected. His preferred metaphor, though, is the author who has been taken over by his own novel.

“Neh started as one of those things that has developed a personality of its own,” he says. “It’s very tongue-in-cheek and that’s something I’m not.” 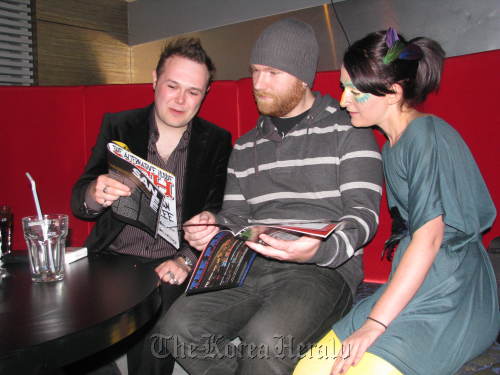 The creators of Neh Magazine examine a recent edition. Neh magazine’s publisher CJ Koster-Allen, art director Chris White and style director Jessica McCormick look through a copy of the magazine. (Rob York/The Korea Herald)
Compared to other expat magazines in Korea, Koster-Allen calls Neh a “belligerent pirate” taking its fill of genres before moving onto another, but then calls it an underdog because it is new, and therefore has a comparatively smaller following.

“When I compare Neh to other magazines in Seoul there’s a consistent theme in their articles,” he says. “I don’t want (Neh) to be narrow. The vision for Neh is that it has that broad focus.”

Chris White, the mag’s art director, has a lot to do with that. “CJ and I just kind of team up and come up with concepts,” he said. “We try to be as creative as possible, to maintain continuity between articles and keep quality high.”

In its eight previous issues, its themes have included “food,” “creative thinking,” and, for November/December, “alternative.” The one thing it has done consistently is try to bring attention to artists, musicians, and writers.

The October (“geek”-themed) issue included a profile of Kim Yeo-hee ― better known as Applegirl ― who became an Internet sensation by performing popular songs accompanied by nothing more than iPhone apps.

The alternative issue included profiles of a filmmaker, a b-boy dance troupe, and even a tattoo artist. And during the summer, Neh’s “creative thinker” issue drew so many submissions of (among other things) poetry, essays and profiles of interesting individuals in Korea that it had to become a two-part series.

“It’s a reflection of the people who live here,” Koster-Allen says. “It doesn’t cater to a particular group.”

Koster-Allen, who has been in Korea three years, had been considering starting a magazine here for some time. When this venture started, he said he had actually envisioned a smaller publication with a low budget. Four months after that, though, they had produced their first issue in March, and it only grew from there.

At their first meeting, Koster-Allen says there were 12 people on the staff, but that there are now 25 contributors, nearly half of whom are not based in Bucheon.

The number of copies they publish is never short of 500, but may vary by month. “We cater to how many advertisers want it in their shop,” he says. In addition to Bucheon, the magazine is available in Itaewon, Bundang, Ilsan and Suwon.

Following a break from its publishing schedule, Neh returns Feb. 12 with the “future” issue. “We’re featuring a new events calendar and you can describe the features as presenting a unique view of things to come in 2011,” Koster-Allen says.

As for Neh’s future and his “goals” for the magazine?

“There aren’t any, we go month by month. We know how many magazines (we print) and we know when they’re gone that we’ve achieved something,” Koster-Allen says.

There is one objective he is more concrete on: “We can see Neh running for at least another year. Neh is Bucheon’s first magazine to last more than six months.”

He also says with certainty that the magazine will be having its release parties each month for staff and readers to enjoy, though the venue for the next one is to be arranged. Also, starting in January, they will launch a website at www.nehmagazine.com as well as NehTV, a viral video series supplementing the magazine’s contents.

For 2011, Koster-Allen said that the magazine will be seeking new contributors, and even to fill some of its editorial positions. “There’s never a time when we think we have too many people,” he says.