[ The Korea Herald – Send E-mail ]
Ice man’s adventure to break world record
By
Published : Jan 4, 2011 - 09:47
Updated : Jan 4, 2011 - 09:47
A 51-year-old Dutch man jumped into a tank filled with ice water in an effort to raise awareness of climate change and promote his plans to break a world record in Hong Kong, the Telegraph reported Thursday.

Wim Hof of the Netherlands, known as “Iceman,” has a world record of staying in ice water for an hour and 44 minutes. Now he plans to break it on New Year’s Eve by staying for an hour and 50 minutes. 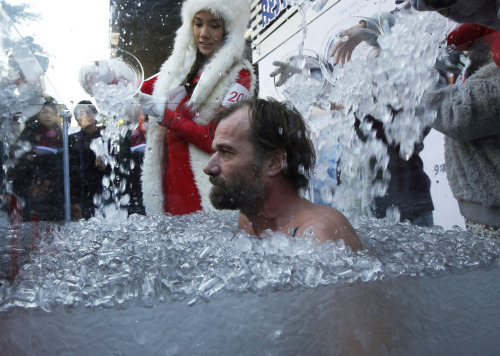 Wim Hof of the Netherlands immerses in ice water during a performance to arouse public awareness of global warming in Hong Kong Dec. 29. (AP-Yonhap News)
He is also well-known for his ability to stand extreme cold, such as running the fastest half-marathon barefoot on ice or snow, although his record was later beaten by Chen Kecai of China.

“When I am performing ice immersion, actually I do not think very much,” Hof said. “It is all before. Before coming to Hong Kong to do this challenge, I like a psychic preparation, and it is not of one day. It’s of many days. It’s coming and going. It’s like preparing yourself inside for what is to come.”


To watch the video clip: