The electronics giant won the prize for its smartphone Galaxy S and tablet computer Galaxy Tab in recognition of the products’ enormous influence on communication culture as well as their sales performance this year. The annual awards ceremony is hosted by Donga TV, part of the Herald Media group. 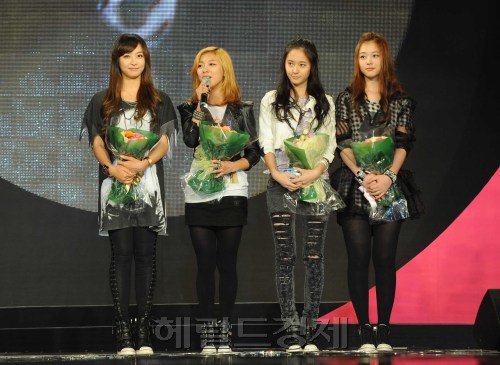 Girl group F(x)’s member Luna speaks after the team received the best style icon award at 2010 Korea Lifestyle Awards. (Park Hae-mook/The Korea Herald)
The grand prize in the fashion and design industry was given to Daegu Metropolitan City, for its successful launching of a series of fashion related events and projects this year, including “Daegu Fashion Fair” and “Milan Project.”

Restaurant Unamjeong was given the grand prize for food branding for their innovative yet traditional presentation of genuine Korean food. Opened in 2009, the restaurant is well-known among foreigners looking for an introduction to quality Korean cuisine. 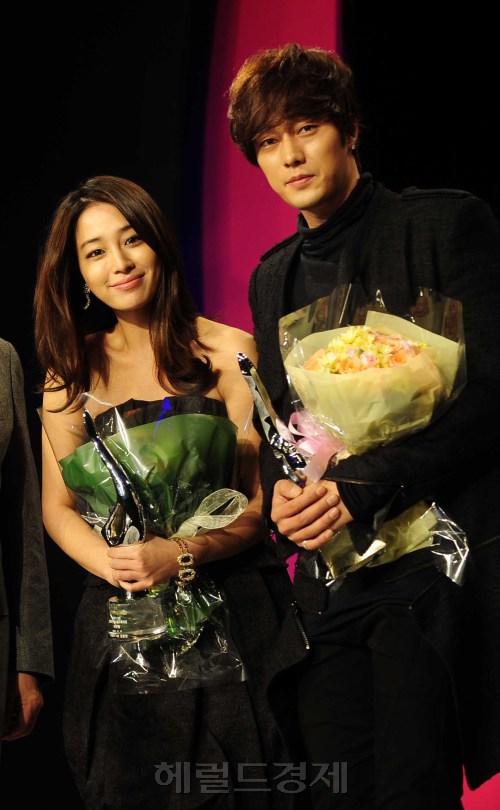 Actress Lee Min-jeong and actor So-Ji-sub pose after being honored as this year’s best dressers at 2010 Korea Lifestyle Awards in Seoul on Monday. (Park Hae-mook/The Korea Herald)
JUVIS, a weight-loss institution owned by female CEO Cho Seong-gyeong, was awarded the grand prize as the best company for women. Its free weight-loss service for women and children of low-income families, as well as job creation for women who have specialized in food and nutrition, was highly regarded by the awards committee.

FOREVER 21, an American chain of clothing retailers, was honored as the best fashion brand of the year. Ever since its first Korean branch opened in Seoul in 2008, the brand has been gaining popularity, offering diverse fashion ideas and creative inspirations.

In total, about 20 groups and individuals were honored Monday night, including a wedding service agency, online shopping malls, cosmetic brands, and medical institutions.