With such shenanigans gracing the headlines, television producers have recently turned to fictionalizing the political world hoping to inspire viewers and restore faith through its dramas.

Since its debut, SBS’ “Daemul” have been generating big ratings in its portrayal of Korea’s first female head of state and rival network KBS is now set to roll out “President,” its own series anchored by Choi Su-jong as a presidential candidate alongside his wife Ha Hee-ra ― also playing his onscreen spouse. 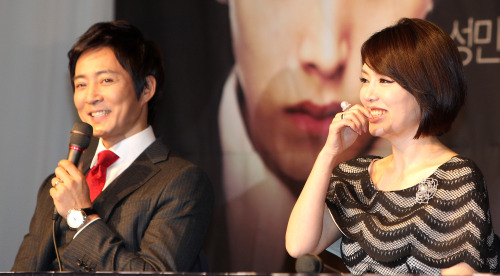 Choi Su-jong (left) with wife Ha Hee-ra speaks at the official unveiling of the new KBS political drama “President” in Seoul on Thursday. (Yonhap News)
The show will look to steal some of SBS’ thunder when it begins its run on Dec. 15 on Wednesdays and Thursdays.

At the official unveiling Thursday in Seoul, the cast and crew were adamant to distance their show from “Daemul,” saying the forthcoming series offered a “dramatically” different take on the world of Korean politics.

“(‘President’) focuses more on the stories that happen behind the scenes in the run up to an election and how a candidate’s drive for the presidency affects his family life like his relationship with an estranged son, and most of all, his wife.”

Ha, who will be appearing on the small screen for the first time in nearly 20 years with her real life partner, will likely be enough to attract viewers out of sheer curiosity.

“It was after my husband was cast in the show that I read the script,” the 41-year old Ha said.

“Immediately, I loved the character of the first lady-to-be and then they offered me the chance to take part but I had to give it some thought because it required me to act alongside my husband.”

For Choi, the idea of working with his wife did not pose much of a problem. He said they were both professionals who had been in television for a large portion of their career in entertainment.

“I told producers that it would be an honor for me to act alongside Ha Hee-ra the actor, not Ha Hee-ra, my wife,” Choi said.

Ha says she finally committed to the project through a text session with Choi at their home one evening.

Choi had been alone in his study when he received a message from Ha who asked what he had thought of her coming on board the series.

“I messaged her back saying that it would be a great honor to work with Hee-ra, the actress,” Choi said smiling from ear to ear.

Much of the show’s spotlight has been on the couple’s casting as both are considered to be Korea’s most beloved celebrity couple due to their lasting marriage.

On his thoughts about what being the leader of a nation meant to him on a personal level, Choi got serious and in character speaking with presidential gravitas.

“When we think about kings, we think of an all encompassing entity of power, ruthlessness, and an iron-fist ruling over his kingdom,” he said.

“With presidents, it is quite different. President of a democratic society is someone who must communicate with the people. He is a servant for the people and must share his concerns and goals for his nation as he pursues his and their dreams at the same time and we hope to accomplish honoring such a figure through this program.”