President Lee Myung-bak instructed his military to strike North Korea’s missile base near its coastal artillery base if it shows signs of additional provocation.

In a video conference with Joint Chiefs of Staff Chairman Gen. Han Min-koo shortly after the shootings, Lee ordered a “manifold retaliation” against the North for its artillery attack, according to Lee’s spokesperson Kim Hee-jung.

“President Lee instructed (the military) to strike North Korea’s missile base near its coastline artillery positions if necessary ... if there is an indication of further provocation,” Kim said. 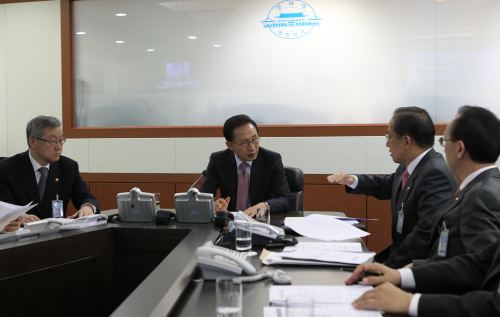 “The firing of artillery by North Korea on Yeonpyeong Island constitutes an indisputable armed provocation against the Republic of Korea,” President Lee’s top aide for public relations Hong Sang-pyo said in an official statement following an emergency security meeting presided by Lee.

“Making matters worse, it even indiscriminately fired against civilians. Such actions will never be tolerated.”

The Armed Forces of the Republic of Korea immediately and strongly responded to the provocation in accordance with the rules of engagement, and damage to the North has yet to be verified, Hong said.

“The South Korean military will retaliate against any additional acts of provocation in a resolute manner,” he said.

“The North Korean authorities will have to take full responsibility for the incident.”

The North fired dozens of shells across the western sea border onto the South’s waters and Yeonpyeong Island, killing two South Korean soldiers and wounding 19 others including three island residents. 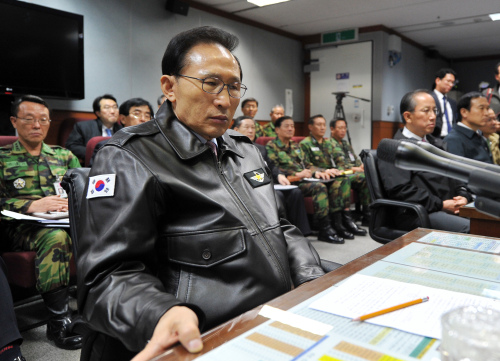 Lee earlier ordered his top aides to sternly respond to North Korea’s artillery shooting while making every effort to keep the situation from getting worse.

“(We) should carefully manage the situation to prevent the escalation of the clash,” Lee was quoted as saying by a Cheong Wa Dae official before the emergency meeting of security-related ministers at an underground bunker of the presidential office.

Cheong Wa Dae said it was looking into whether the North fired the artillery in protest of the South Korean Navy’s “Hoguk Exercise,” one of its three major annual defense drills, near the island.

“North Korea sent a complaint this morning asking whether (the exercise) was an attack against the North,” Lee’s spokesperson Kim said earlier in the day.

“We are confirming whether (the North’s artillery shootings) are related to this.”